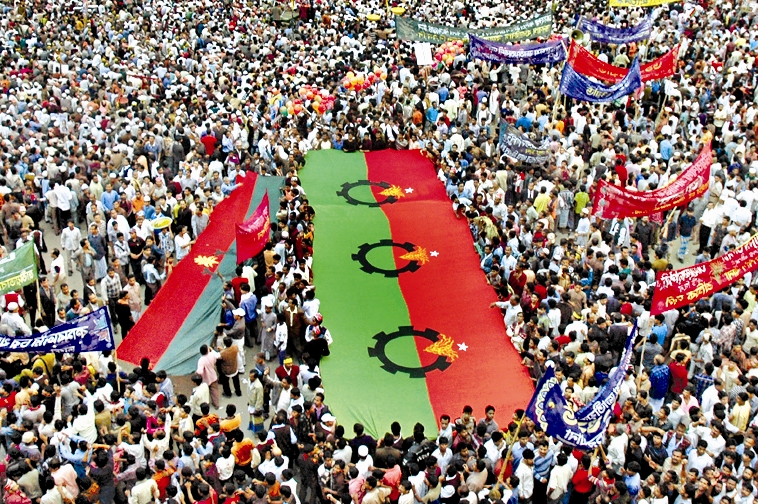 It was a bizarre scene by any measure. On a local Bengali television channel in London a few days ago, a United Kingdom-based activist of the Bangladesh Nationalist Party made it known that the late General Ziaur Rahman was a ‘statesman’ acknowledged by the entire world. He had a sheaf of papers with him, trying to prove that the doors to multi-party democracy were ‘opened’ by Zia in the years in which he lorded it over Bangladesh. And, of course, Zia for this diehard BNP man, as also for others of his kind, remains a ‘shaheed’, a martyr, though no one among the late dictator’s fans has ever explained in what religious war or battle he came by his ‘martyrdom’. No one in the BNP remembers, conveniently, the hundreds upon hundreds of men in the armed forces General Zia pushed into martyrdom in his five years in power.

The problem is typical of BNP loyalists. That man, at the end of the television programme, made another gaffe when he remarked that Bangabandhu Sheikh Mujibur Rahman and Dr. Kamal Hossain had travelled to Simla in July 1972, where they joined Indira Gandhi and Zulfikar Ali Bhutto to sign a peace deal. He was insistent, despite being corrected all the time, that Bangabandhu and Kamal Hossain were indeed there in Simla and had together agreed to not only let the 93,000 Pakistani prisoners of war go home but also pardon all the Bengali collaborators of the Pakistan army. He had, said he, the documents to prove his arguments. He clearly had no idea of the tripartite agreement of April 1974. Like so many other uninformed as well as mischievous people, he loudly proclaimed that Bangabandhu had pardoned all collaborators of the Pakistanis. The Collaborators Act was a document which patently was beyond his comprehension.

There was a certain method in that madness. But why blame him alone? In these many years and especially since the assassination of General Ziaur Rahman in May 1981, much has been made of the nation’s first military ruler’s ‘greatness’ in Bangladesh’s history.

While one may not quite have agreed with the present government’s move to strip Zia of the Independence Award and remove the citation on it from the National Museum, there can be no defence of the military ruler being placed on a par with the Father of the Nation. That act by the last government led by Khaleda Zia was as crude as it was unpardonable, for a couple of reasons.

First, it was quite all right to have conferred the award, posthumously, on Zia. Like so many others, he was a hero in the War of Liberation. Let there be no question on that score. Second, and more important, it is utterly crass when a ruling class, deliberately oblivious to history, decides in its questionable wisdom that the man who led the Bengali nation to freedom needs a medal as an acknowledgement of his role. Bangabandhu’s award or reward, whichever way you look at it, was the emergence of a free Bangladesh. You do not demean a nation’s founding father through conferring on him a medal, for he remains above everyone and everything.

In these past three decades, consistent and absolutely unashamed attempts have been made by Zia fans and the BNP to undermine not just Bangabandhu but also the Mujibnagar government.

A few years ago, a one-time BNP lawmaker named Shakhawat Hossain Bakul went on Channel ’71 television with the crude intention of bringing down Bangabandhu’s reputation a notch or two. Clearly upset at the Awami League government’s plans to bring all the old collaborators of 1971 to book, Bakul tried a fast one – informing the audience that the Father of the Nation had pardoned all the local hitmen of the Pakistan army. And he said he had photographic evidence to prove it.

That sounded pretty interesting, indeed curious. Bangabandhu, shrieked the man, had been accompanied to the Lahore OIC summit in February 1974 by, of all persons, Shah Azizur Rahman. But Bakul would not show the pictures he had in his hands, until he was compelled to do so at a point. And what did the pictures reveal? At Lahore airport, Bangabandhu is on the dais as the national anthems of Pakistan and Bangladesh are being played. On his left is Z.A. Bhutto and on his right is Pakistan’s President Fazle Elahi Chaudhry. Bakul had been trying all this while to pass Chaudhry off as Shah Aziz. He got properly clobbered by Tofail Ahmed for his lies.

The discomfort of the BNP and of those who were once part of it where historical truth is concerned is quite a sorry sight. Sometime towards the end of last year, the former BNP minister-turned-LDP leader Oli Ahmed was put to a gruelling test by a very enterprising and intrepid young Bengali journalist, Tanvir Ahmed, on a Bengali television channel programme in London.

Oli Ahmed, despite having fought in the War of Liberation, tried doing as much as he could to stay clear of the truth. For him, Zia was the man who had declared, not announced, Bangladesh’s independence in March 1971. He asserted that he was beside Zia when the latter drafted his independence message (which is not true, if you go through Belal Mohammad’s account of events and if you recall the role A.K. Khan and Dr. A.R. Mallick played in the preparation of the short address Zia finally delivered on Biplobi Bangla Betar on the evening of 27 March 1971). Tanvir did a good job here. In whose name did Zia do that? Oli hawed and hummed but eventually acknowledged that Zia had made the announcement through Bangabandhu’s ‘blessings’! Blessings? When did Bangabandhu bless Zia?

Oli did not stop there. He carried on with his narrative of anti-history through suggesting that Bangladesh’s armed forces had fought the war and brought freedom to Bengalis. Not once did he mention the Mukti Bahini. Not once did he say that it was a guerrilla war the freedom fighters waged. And the Mujibnagar government? It was a government, said an unembarrassed Oli, on paper. So how did he get to wage war against Pakistan if the Mujibnagar administration had been a ‘paper government’? Oli’s answer was a fresh new instance of hilarity: he told his questioner he had fought under Colonel M.A.G. Osmany, who was the commander-in-chief of the armed forces. And hadn’t the Mujibnagar government appointed Osmany to that position? The former Zia aide and minister mumbled an incoherent answer. Tanvir Ahmed would not let go. How did Oli get his salary during the war? His response: he received thirty taka a month from the Indian government. He was a freedom fighter getting his monthly salary from the Indian government and not from his own government? Oli had no answer.

And, yes, at a point Oli told Tanvir that Bangabandhu and the Awami League team were conducting negotiations with the Yahya Khan junta at, as he put it, erstwhile Hotel Sheraton. He did not remember that the talks were held at President’s House, which after liberation was turned into Ganobhaban.

Such BNP men have been tying themselves in knots day after day in their Don Quixote-like battles against the windmills. Along the way, they have caused some amusement and much mirth. Fazlur Rahman Potol, in his time as minister of state for sports, quite irritated the Bangladesh cricket team in Colombo once through his invocation of Pakistan’s Ayub Khan. He reminded these very Bengali sportsmen of the exhortation Ayub made to his soldiers at the height of the India-Pakistan war of September 1965: ‘aage barho, qadam barhao’. He predictably became the butt of nationwide criticism and, of course, was roundly condemned in the media.

Let us call it a day.