Is a cash crisis imminent?

The National Economic Council is approving development projects worth billions of taka, hopefully with the source of funds in mind. These won’t be implemented overnight and thereby their impact will be spread over a number of years.

Most, but not all are based on the five-year plan or the 100-year Delta Plan but it is these “not all” that worry economists and think tanks.

In general, they focus on the more immediate indices that are showing alarming slides including the usually reliable ready-made garments sector.

However, Bangladesh Garment Manufacturers and Exporters Association (BGMEA) President Rubana Huq has given ample warning that slowdown in export destination economies and fierce competition has led to an above 7% decline in exports resulting in the closing down of hundreds of support factories and subsequent loss of employment.

This is not good news in a market where unemployment is rising. The silver lining comes with a huge challenge: Providing one member of each family with a job as declared in the recent Awami League triennial Council.

Leaving aside the long-term targets, there are worries about the short term.

Government borrowing from banks has already exhausted the yearly target and banks are grumbling about managing liquidity in the face of fixed deposit and loan interest rates — both that are to be in single-digit numbers by March.

The BGMEA’s appeal for a devaluation of the currency hasn’t been accepted by the authorities on the pure grounds that imports, especially food items, will become pricier.

The share market continues to create records in decline figures and this time due to the selling drive of shares in blue-chip companies such as Grameenphone and BAT.

Grameenphone’s major stakeholder, Telenor, has issued a legal notice to the president expressing their intent to go for international arbitration to resolve the massive amounts of dues being claimed.

How they plan to address the issue, having agreed to deposit Tk1,000 crore as directed by the Supreme Court, remains to be seen.

The second player in the market, Robi, had made initial threats of closing down but are probably playing wait and see for the time being.

They too have made payments on dues they contest as directed by the court and are finally looking for a listing on the stock exchange and raising funds through IPO.

That is encouraging news after the withdrawal from Bangladesh of Glaxo SmithKline Pharma and Sanofi.

From the heist of the foreign reserves to the growing siphoning of bank money through bad loans and over and under-invoicing, a cash crisis is just waiting to happen.

Many believe none of these amounts will ever return to the country. Shortly after taking over, the finance minister had promised action to do so, including sending audit teams to the banks in question.

He has since made a u-turn, first by saying that he can’t resolve the issue by sending businessmen to jail and then rescheduling loans for long term periods on a mere 2% interest and a small one-time deposit.

From information last available, that too hasn’t worked. Banks are waiting for the government to provide capital injections to maintain their Basel ratios.

With the large withdrawals, it is hard to see where this injection will come from given the failure of the National Board of Revenue to meet its collection targets in spite of the new VAT law.

The hike in interest rates on bonds has discouraged sales and banks and financial institutions are now literally knocking on doors for deposits.

The matter hasn’t been helped by the government announcement of halving interest returns on post office savings accounts.

Overall, a sense of fear prevails in those who had previously considered FDRs as safe deposits. Many institutions have failed to pay interest in time while others are just unable to pay back the capital.

Someone somewhere needs to decide that enough is enough and move stringently to recover loans, freeze and take over accounts of defaulters, and push harder for proper revenue recovery. This includes the quick disposal of the many revenue cases gathering dust in courts. 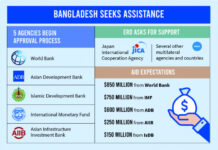 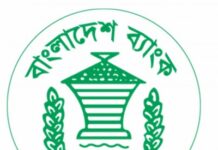 US team in Dhaka to review GSP concerns