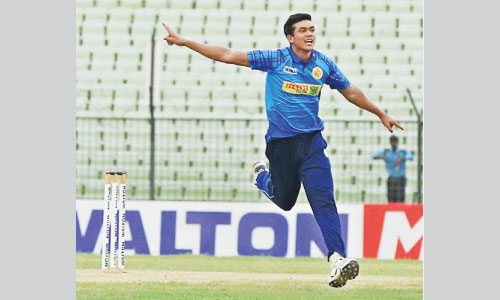 Pace bowler Taskin Ahmed, suspended for illegal bowling action by International Cricket Council, is making progress in the right direction contrary to the common observation, said the Bangladesh Cricket Board officials on Saturday.
Taskin is currently playing in the Dhaka Premier League for Abahani Limited as well as completing his rehabilitation programme chalked by pace bowling coach Heath Streak under the supervision of BCB game development coach Mabub Ali Zaki.
ICC on March 19 suspended Taskin along with left-arm spinner Arafat Sunny after independent assessments found their bowling actions as illegal.
His bowling in some of the matches for Abahani raised suspicion whether the bowler is sincere enough to rectify his action at this stage.
BCB recorded the bowling of Taskin during their match against Legends of Rupganj in order to assess improvement of his bowling action after going through a rehabilitation process.
The video was forwarded to national bowling coach Heath Streak, currently busy in the Indian Premier League with Gujrat Lions, for his observation.
National team’s computer analyst Nasir Ahmed told New Age that Streak is happy with the outcome and suggested few drills to help the young bowler recover faster.
‘Taskin had made slight improvement [according to Heath Streak],’ said Nasir.
‘Considering where he was during the World Cup with his bowling certainly it is looking better.
‘He needs to continue his rehabilitation programme to make necessary changes that will allow him to return to international cricket,’ he said.
Arafat and Taskin were reported after their side’s opening match in the ICC World Twenty20 2016 against the Netherlands in Dharamsala on March 9.
Taskin appeared for the independent assessment at the ICC-accredited testing centre in Chennai March 15.
Taskin began his rehabilitation programme on April 27 and till date had completed six sessions with Mahbub, who had his last session on May 19.
Mahbub looked satisfied as Streak saw some improvement in the bowling action of Taskin but was not ready to announce any specific deadline about him.
‘It [Rehabilitation] is going to take time and you cannot figure out any specific time frame because it always varies from person to person,’ said Mahbub.
‘We are working to fix up his hand positioning,
‘He jerked slightly during some of his delivery and we are looking to diminish it from his bowling action altogether.’
Streak advised Taskin to bowl in front of a mirror as much as possible so that he may get a clear picture of his body movement and it is proving to produce him rich dividend.
‘We are using a 4 feet by 9 feet mirror during his sessions and certainly it helps because the bowler can watch all his movement and can identify the areas of concern,’ said Mahbub.
According to normal practice usually a bowler with illegal bowling action takes at least 20 sessions to remodel his action.

Mashrafee fit and ready to lead