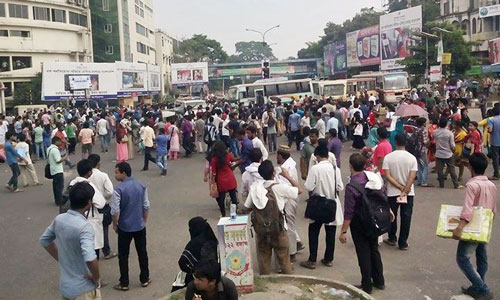 The demonstrating admission seekers to medical and dental colleges on Sunday evening called off their blockade on Shahbagh intersection.
Stuck vehicles around the Shahbagh intersection started to move slowly this evening, as the protesters withdrawn the blockade around 5:00pm.
The students spokesperson Arif Bin Saki, at a press briefing said they would demonstrate at central Sheheed Minar on Monday around 9:00am as a part of their continuous protest.
The admission seekers also urged all medical students and internee doctors across the country to observe one hour class and work abstention on Monday.
Meanwhile, Progressive Student’s Alliance also announced a day long strike on October 7, at all educational institutes across the country protesting at the incident of question paper leakage and demanding fresh admission test to medical and dental colleges.
A delegation of the protesters also went to the prime minister’s Office to submit a memorandum to press home their demand of cancelling the admission tests for question paper leak and retaking it with a fresh set of question papers.
They could not meet the prime minister, however submitted the memorandum to the designated officer at PMO, Arif said.
The protesters gathered at Central Shaheed Minar at around 10:00am. At around 12:30pm they brought out a huge procession and marched towards Shahbagh. Police created a barricade putting several layer of barbed-wire fence across the street but the students proceeded to Shahbagh intersection removing the barricade.
Traffic movement on the busy intersection came to a halt triggering severe traffic congestion. The demonstrators on Saturday announced marching towards the Prime Minister’s Office if their demands were not met by Saturday.
Source: New Age