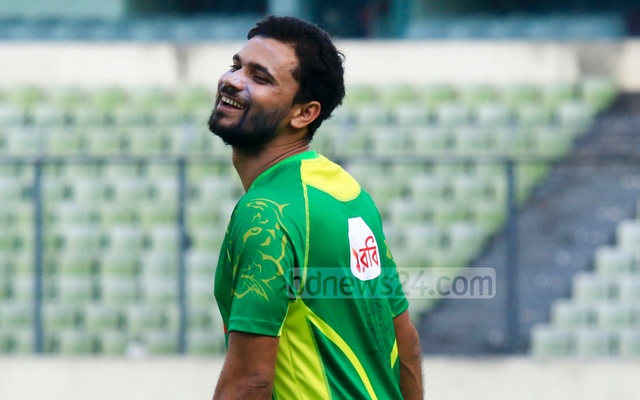 He has been a familiar, reassuring sight on the field, hobbling between overs wearing knee caps and yet tossing himself around inside the circle. Now, strapping Bangladesh pacer Mashrafe Bin Mortaza stands on the cusp of 15 years in international cricket.

The Bangladesh limited-overs captain has driven far down an injury-plagued career. The ups and downs he went through, however, have only added to the flair of his defiant avatar, a cricketer who leads by example at 33.

“Am I going to be the first…?” he asked in amusement when he was approached during a workout at the BCB Academy gym. “I thought a couple of others may have also played for so long.”

He will, in fact, be the first Bangladesh player to roll through a decade and a half on the field.

Mashrafe emerged as a speedstar with immense potential and was swiftly thrust into the national team from the youth contingent. He earned his first Test cap against Zimbabwe on Nov 8, 2001 at the Bangabandhu National Stadium. He was just 18 then.

But the horrors would strike him shortly afterwards. A slew of injuries, both minor and major, afflicted him and he had to go through seven surgeries on his two knees. But he has gone under the knife, and through painstaking rehabilitation, and performed on the field to save his career when even the most ardent optimist would think it was all doom and gloom for him.

Still one of the best performers in the team, he led the Tigers to their most memorable spell of limited-overs success last year.

Pacer Mohammad Sharif’s international debut dates back before Mashrafe’s and he is still playing. But it’s been nine years since Sharif, who was a rare seamer among Bangladesh players with the ability to reverse-swing the old ball, last played internationals.

So, Mashrafe is the man who can logically stake a claim.

Akram Khan, now the chief of the BCB’s Cricket Operations Committee, had a career spanning 14 years and 187 days while another hero in Bangladesh cricket, Aminul Islam Bulbul, played for 14 years and 44 days.

The career of Minhajul Abedin, the incumbent chief selector, stretched for 13 years and 61 days.

But the impending moment did not dull Mashrafe’s sense of humour. “Fifteen years is a long time. I managed to spend 15 years limping,” he said, laughing.

But he grew pensive when reflecting on the path he has traversed and did not forget to pay tributes to his teammates, both present and past.

“Actually it feels very good. I’ve played alongside several generations. I didn’t get Raqibul [Hasan] or [Gazi Ashraf Hossain] Lipu, but those who I began with – Akram, [Khaled Mahmud] Sujon – they are positioned in high places in the board today,” Mashrafe said.

“Now we have Mustafizur [Rahman] and [Mehedi Hasan] Miraz…I’ve enjoyed playing with all of them and I will try to do that as long as I play,” he added.

Mashrafe, however, goes by the same motto he used to in his early days  – “Enjoy the game”.

“If I didn’t enjoy the game, I wouldn’t be able to play, considering the problems I have had. Everybody helped me a lot. My seniors helped me out even after they retired, mentally in particular. I am grateful to them all.

“How much they thought of me, cared for me, I will never be able to repay them. But I always hold respect for them, both my seniors and juniors.”

What Mashrafe could have possibly achieved had his career not been plagued by injuries is the thought that bugs many observers of Bangladesh cricket. But Mashrafe does not regret, he revels in the opportunity to represent the country for such a long time.

“I may have achieved something greater, my stats could have read better without the injuries. But the good feelings outweigh the regret when I think I’ve been able to play despite all the problems. I had everyone’s blessings,” he said.

“It feels great at the moment. Not for what I have been able to do but because I’ve spent 15 years as a member of the Bangladesh team. I value that a lot.”

Mashrafe thinks the milestone he is about to touch is one that many Bangladesh players will reach and go beyond in future.

“I pray for all those who are playing now. Not just 15 years, they can have careers of 18-19 years. Shakib, Tamim, Mushfiqur are already 10 years in their career. They can easily play 7-8 years more…Good luck to them all.”

Mashrafe will take the field on the day he completes 15 years in international cricket, but not in national colours, though.

If things go as planned, he will dart towards his bowling mark sporting the Comilla Victorians jersey when the rain-hit Bangladesh Premier League restarts on Tuesday.

‘Will really miss the Asia Cup’