An activist of the pro-BNP student wing Jatiyatabadi Juba Dal (JCD) has accused the police of ‘shooting him in his left leg after forcibly picking him up from his house” about two months after being injured. 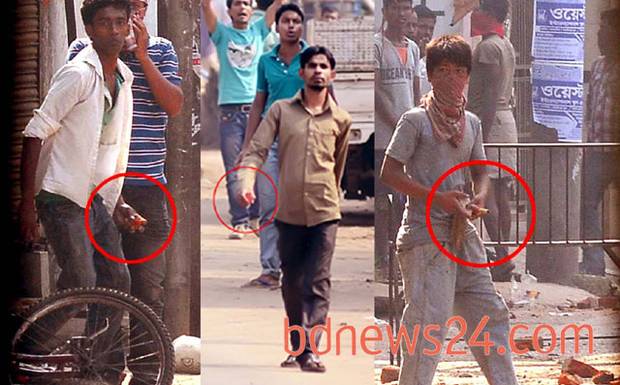 However, police refuted the allegation saying JCD activist was injured in a police firing after a petrol bomb was hurled at the vehicle of an Officer-in-Charge (OC).

The activist Mohammad Arafat, 25, is now undergoing treatment at Chittagong Medical College and Hospital (CMCH) under police security. The lower portion of his left leg has been amputated after a three-phase surgery.

Arafat, however, does not want to file a lawsuit against the police despite levelling the allegation.

Talking to bdnews24.com at the hospital on Thursday, Araft also expressed his dissatisfaction over being ignored by the BNP. Except for one or two leaders and activists, none from the party inquired about his treatment, he alleged.

He claimed that three policemen detained him from Shahid Lane Bihari Colony of the port city’s Akbar Shah area on January 7 and took him to the police station.

“I was then taken from the police station to the flood protection embankment around 6:30pm and shot in the lower part of the left leg. I was admitted to the hospital around 9:30pm on that day. Later lower part of my left leg, including knee, was amputated after several operations.”

The JCD man further said, “I had tried to bribe the policemen before they shoot me. But they didn’t demand any money from me.”

When contacted, Shahadat Hossain, General Secretary of Chittagong city unit of the BNP, said, “By detaining Arafat, the police tried to get deposition from him against local BNP leaders under the Section 164. As he didn’t agree to it, he was shot in the leg.”

Denying the allegations, the police said that a group of blockaders threw a petrol bomb at the vehicle of OC of Pahartali Police Station Azizur Rahman at Sagarika area of the port city on January 2, two days ahead of the tenth parliamentary elections. Araft was injured when the police opened fire in self-defence.

The police officials said that Arafat was also injured while enforcing road blockades in AK Khan and Pahartali areas, vandalising and torching vehicles, exploding crude bombs and attacking law-enforcers as part of the agitation programmes of the BNP-led 18-Party Alliance before and after the national elections.

Though Arafat denied the allegations of his involvement in the petrol bomb attack, he admitted that he had taken part in different political programmes of the then opposition alliance during that period.

Additional Deputy Commissioner of Chittagong Metropolitan Police (CMP) SM Tanvir Araft said that he was present on the spot during the petrol bomb attack.

“After the petrol bomb attack, the opposition activists swooped on the police with crude firearms. The attackers dispersed after the police opened fire in self-defence. Later, bullet-hit Arafat was arrested from the spot.”

Sub-Inspector of Pahartali Police Station Abu Salek said Arafat was arrested along with a sharp knife. “After his arrest, we found his leg was bleeding. After that he was admitted to the hospital.”

Asked about the allegations of shooting in the leg after the arrest of the JCD man, the police official said, “He was captured from Sagarika intersection in presence of the people.”

Arafat was sued in two cases filed with the Pahartali Police Station in connection with the petrol bomb attack.

The police official said that Arafat also took part in the incidents of railway blockade and hurling crude bombs at a police patrol on AK Khan area during the countrywide blockade enforced by the opposition alliance on November 30 last year.

After the incident, the CMP uploaded a picture on its Facebook page where Arafat is seen holding a crude bomb in his hand.

Arafat said that he has a shop at Sagarika area and that his two brothers are the activists of the Chhatra Dal and Jamaat-e-Islami’s student wing Islami Chhatra Shibir.

He said that only Chittagong city BNP General Secretary Shahadat Hossain inquired about his treatment while he was in the hospital.

Of late, however, many BNP leaders visited him. He suspected that there might have been ‘political motives’ behind the issue getting highlighted after so many days.

Arafat said he would quit politics after being released from the hospital.

“Some assured me to take to madam (BNP Chairperson Khaleda Zia). All are coming to see me at a time when I’m getting well. There might have been politics behind this. I’ve lost my leg… Only I can feel the pain of it. I won’t do politics anymore,” he said.

Man of integrity, politician of conviction