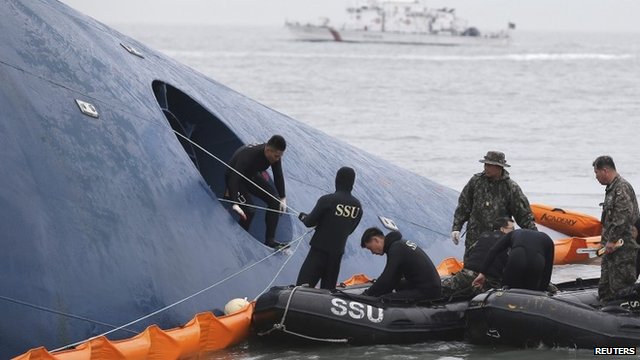 Rescue teams are frantically trying to find any survivors, as Martin Patience reports

Bad weather, murky water and strong currents are hampering the search for survivors of the South Korean ferry disaster.

Emergency services are still searching for about 280 people missing after a ship carrying 475 people sank.

Officials say 179 people have been rescued. Most of the passengers were pupils at the same high school.

Park Geun-hye said that time was running out and that every minute and every second was critical. 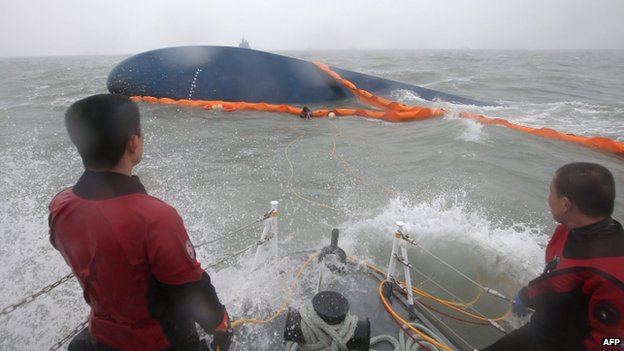 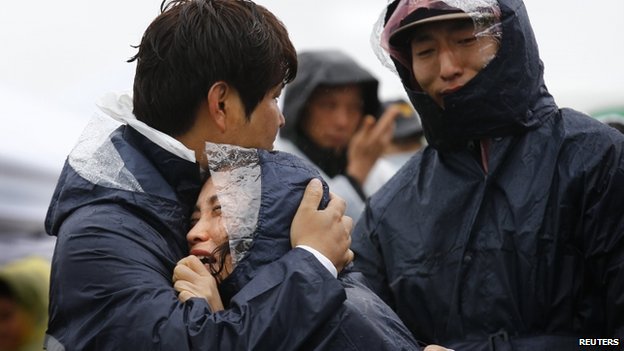 Relatives of the missing are enduring an agonising wait for information 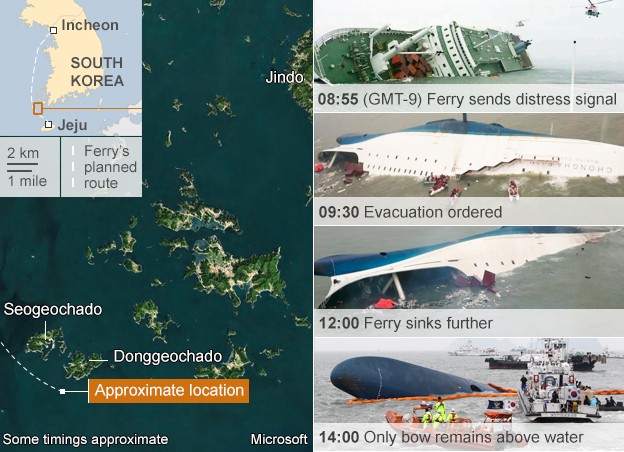 Eighteen people are confirmed to have died, with dozens more injured.

South Korea’s Yonhap news agency reported earlier that one Russian and two Chinese were among the missing.

Military divers have been fighting high winds and waves to try to access the vessel but were not able to get into any of the cabins, the Chief of the West Regional Headquarters of the South Korean Coastguard, Kim Soo-hyun, said.

At a press conference on Thursday, Mr Kim said reports that the ferry went off its course were being investigated.

It is not yet clear what caused the ship to list at a severe angle and flip over, leaving only a small part of its hull visible above water, but some experts have suggested the ship may have hit an underwater obstacle.

Passengers’ relatives are also questioning the role of the captain, who is being quizzed by police.

Capt Lee Joon-seok was shown apologising on television. “I am really sorry and deeply ashamed. I don’t know what to say,” he said.

It comes amid reports he was one of the first to escape the doomed ship.

Naval and coastguard vessels have been using floodlights and flares as darkness falls to maintain a search now involving more than 500 divers, 171 vessels and 29 aircraft.

But distraught relatives gathered in a gymnasium on nearby Jindo island insisted more should be done, and vented their grief and frustration to anyone who would listen.

“Get my child out of that ship! Dead or alive,” one distraught father repeatedly shouted to rescue and local government officials.

The vessel – named Sewol – was travelling from Incheon port, in the north-west, to the southern resort island of Jeju.

Yonhap said the dead included four 17-year-old students and a 25-year-old teacher as well as a 22-year-old female crew member. Identities of the other victims were not immediately known.

The latest figures say 475 people were on board and 278 are still missing. Figures issued by the government have changed several times, prompting criticism. 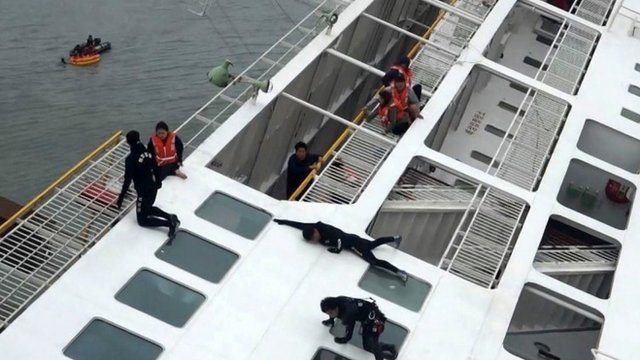 Search efforts have been concentrated on the ship, which sank in about 30m (100ft) of water.

“We carried out underwater searches five times from midnight until early in the morning, but strong currents and the murky water pose tremendous obstacles,” said Kang Byung-kyu, Minister for Security and Public Administration.

Meanwhile, the coastguard chief denied reports that three divers had been swept away and had to be rescued themselves.

Mr Kim said he would approve civilian divers who wished to join the search, provided there was “trust” between them and the official search teams.

He also expressed hope that the arrival of underwater cameras would help divers operating in waters with extremely low visibility.

Privately, some officials admit it is unlikely the remaining passengers will be found alive.

“Honestly, I think the chances of finding anyone alive are close to zero,” one coastguard official told an AFP journalist on a rescue boat.

The US Navy has sent an amphibious assault ship, the USS Bonhomme Richard, to assist with the search.

“We found ourselves in challenging weather conditions today – very low cloud ceilings and reduced visibility and rain, and we’re working a search area around the site in close co-ordination with the South Korean on-scene commander,” he said.

Cranes are expected to reach the scene on Saturday. 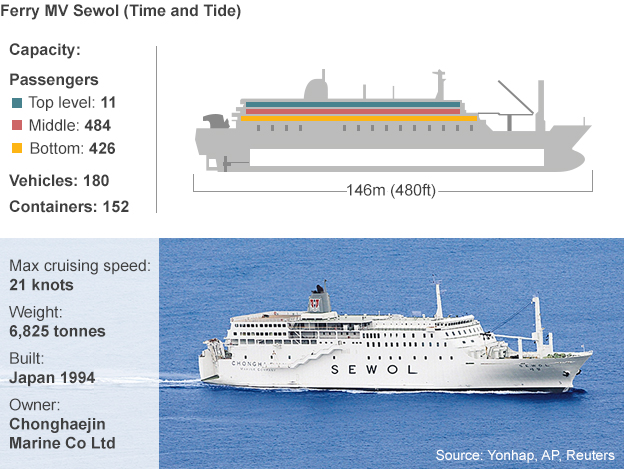 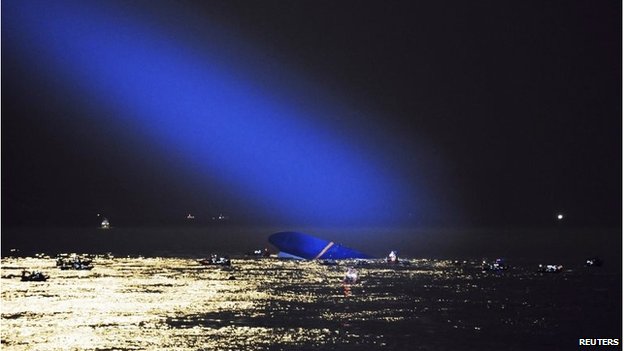 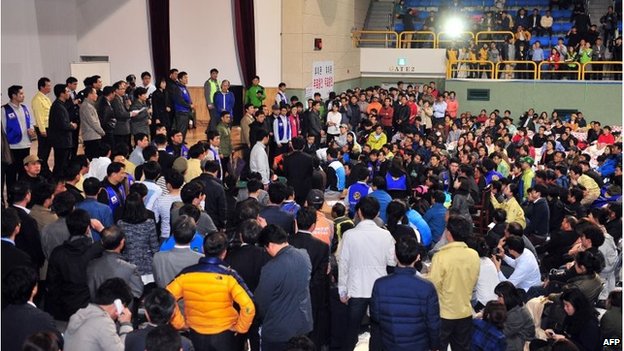 The ferry sent a distress call at around 09:00 local time (00:00 GMT) on Wednesday, about 20km (12 miles) off the island of Byungpoong. It sank within two hours, reports said.

About 325 of the passengers on board the ship were students from Danwon high school in Ansan, near the capital, Seoul, who were heading on a field trip to Jeju island with about 15 teachers.

Survivors say they heard a loud thud, before the boat began to shake and tilt.

Some of the passengers managed to jump into the ocean, wearing life jackets, and swim to nearby rescue boats and commercial vessels.

But several survivors have said that they were told by crew members not to move.

“We must have waited 30 to 40 minutes after the crew told us to stay put,” one unnamed rescued student was quoted as saying by AFP news agency.

“Then everything tilted over and everyone started screaming and scrambling to get out,” he said.

Koo Bon-hee, 36, told the Associated Press that the rescue was not “done well”. “If people had jumped into the water… they could have been rescued. But we were told not to go out.” 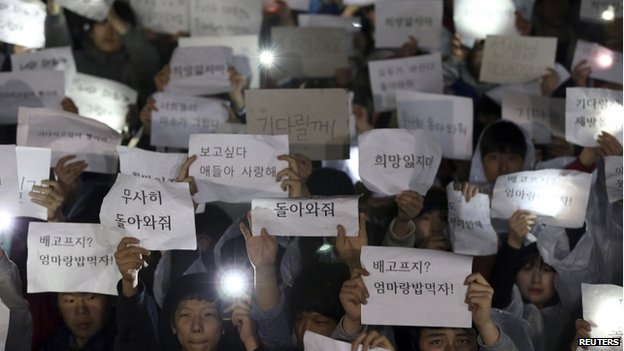 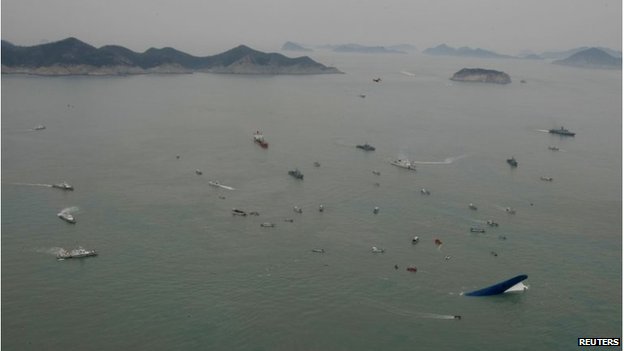 Military and civilian ships, as well as planes and helicopters have been searching for survivors

Some of those trapped managed to send text messages to their relatives.

“Dad, don’t worry. I’m wearing a life vest and am with other girls. We’re inside the ship, still in the hallway,” one girl told her father, AFP news agency reported.

But in a subsequent message she said she could not get out. “The ship is too tilted. The hallway is crowded with so many people.”

However, the authorities have cautioned that they do not think that recent text messages purporting to come from the ship, are in fact from people inside.

Kim Young-boong, an official from the company which owns the ferry, has apologised.

Japan’s prime minister offered “heartfelt sympathy” to the victims and their families, and his government offered help with the search – a rare moment of detente between the feuding neighbours.

Shinzo Abe, whose strident nationalism has raised tensions between the two countries, said his thoughts were with those caught up in the tragedy.

Correspondents say this could turn out to be South Korea’s biggest maritime disaster for more than 20 years.