According to a Bangladesh A team source, Rhodes will join the side in Ireland Wednesday and observe two T20 matches

Rhodes enjoyed a satisfactory tour of the Caribbean, guiding the Tigers to ODI and T20I series wins, after the West Indies sealed a series sweep in the two Test matches. Bangladesh scripted a brilliant comeback in the tour, winning the ODI series 2-1, and produced similar results in the T20I series.

The former English cricketer reached Dhaka Thursday following the 38-day long tour of the West Indies and had a post-tour meeting with BCB president Nazmul Hasan and other influentials of the board.

While the national cricketers will be on leave over the next few weeks and return to business following the Eid-ul-Adha holidays later this month, Rhodes opted to travel to Ireland and observe the Bangladesh A cricketers.

Bangladesh A in their tour of Ireland drew the five-match one-day series 2-2 and will now lock horns with the host in a three-match T20 series. The matches will be played Monday, Wednesday and Friday. 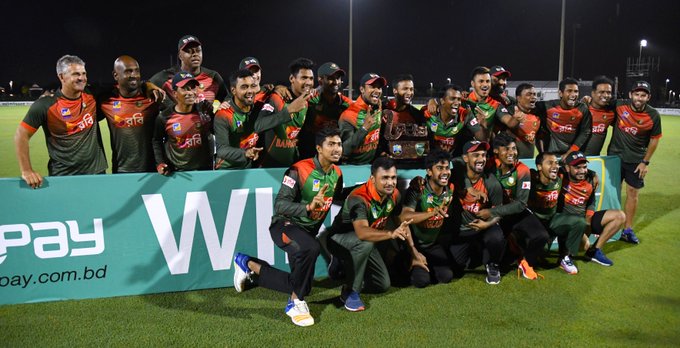 “We really did play well in the second and the third game. I am delighted that we have two series trophies.”@BCBTigers coach Steve Rhodes was surprised at their T20I series win against #WT20 champions West Indies.

Rhodes’ objective from the tour of Ireland is to gain first-hand knowledge of the Bangladesh A cricketers, which will aid him to draw the roadmap for the future.

“It was nice that I had the opportunity to see the members of the Test team, ODI team and the T20I team. So I have now managed to look at around 20 to 22 players. When I go to Ireland, although I will see some of our players that I have looked at previously, for me it is important to know the next crop of players,” said Rhodes to a cricket-based website yesterday.

“I have seen a couple of them already and hopefully, will get the chance to observe a few more in Ireland. I hope to spend some time with the ‘A’ team coach Simon Helmot, because if we want to have plenty of depth in Bangladesh cricket, the ‘A’ team (need) to do well and they have done very well so far. I am very pleased, and looking forward to catching up with them and see them play,” the former English wicketkeeper-batsman explained.

Rhodes was appointed as the Tigers head coach last month. The tour of the West Indies was his first assignment with Bangladesh.