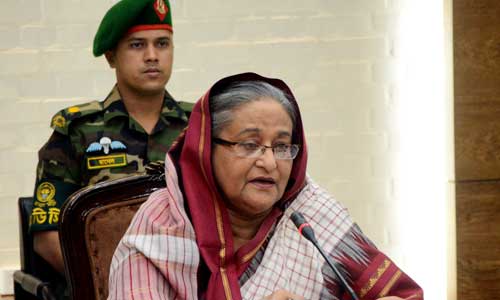 ‘You (Ordnance Factories) will have to keep in mind we will not import all the arms and explosives, as we will have to produce those by ourselves. If we can produce enough, we will go for export in the future,’ she said.
Sheikh Hasina, who also holds the portfolio of defence minister, said the Ordnance Factories has been producing 7.62 millimeter auto rifle, cartridge of various calibre and hand grenades for Bangladesh Army.
The prime minister was delivering her introductory speech at a meeting with high officials of the ministry of defence and its associate bodies at the ministry conference room. This was her second visit to the ministry since April 27 last year following her assumption of office as prime minister for the second consecutive term.
She also expressed the hope that fast steps would be undertaken to enhance the capacity of the officials and employees of the Bangladesh Ordnance Factories to meet the local demand for arms, ammunition and explosives.
Referring to the maritime boundary verdicts over Myanmar and India, the prime minister said it was both political and diplomatic success of her government to gain vast maritime areas after winning the cases keeping the relations intact with the two neighbouring countries.
She also urged all concerned, including the Armed Forces, to take steps for tapping marine resources.
Expressing her firm belief that her government would be able to win the war against poverty, Hasina said the target of her present government is to reduce poverty by another 10 per cent from the present level of 24 per cent.
In this connection, she said the present level of extreme poverty is now 9 per cent and hoped to eradicate extreme poverty within the next two to three years.
Referring to her phone call with Nepalese prime minster Sushil Koirala on Wednesday, Hasina said following his counterpart’s concern about the possible sufferings of the earthquake victims during the upcoming rainy season, she has offered Koirala to build barrack houses if necessary from the Ashrayan Project as a friendly gesture from a neighbouring country.
She also mentioned Bangladesh’s support extended very quickly for the earthquake-hit people in Nepal saying her government proposed sending one lakh tonnes of rice for the affected people as well as other necessary materials.
Hasina also stressed the need for a modern, time-befitting and developed defence system to safeguard national independence and sovereignty for the continuation of the trend of advancement for a developing country like Bangladesh.
Terming the Armed Forces as the symbol of the country’s Independence and sovereignty, Sheikh Hasina said multifaceted programmes are being implemented for further enhancing the capability of the Army, Navy and the Air Force.
Referring to the defence policy framed in 1974 as per directives of Bangabandhu Sheikh Mujibur Rahman, she said the Forces Goal- 2030 has been formulated in light of the defence policy.
Works to reorganise and modernise the three services are going on under the Forces Goal, Hasina said adding that Awami League always worked for developing the Armed Forces whenever it got t he responsibility of running the government.
Praising the role of the members of the armed forces in maintaining international peace, stability and security, she said they earned huge appreciation of the world community and would have to continue their laudable role in maintaining global peace.
She urged each and every member of the armed forces at the UN peacekeeping missions to further brighten the image of the country through working as ‘good will envoys’ of Bangladesh.
Hasina said her government is very much active in maintaining Bangladesh’s position as the highest number of peacekeeper-contributing country.
Sheikh Hasina said steps have been taken to form Short Range Air Defence unit in the Air Force and Bangabandhu Air Base has been set up in Dhaka while a full-fledged new air base has been set up as an advanced base in Cox’s Bazar.
Pointing at the cases filed against her for procurement of MiG-29 fighter planes of the Air Force and modern frigate and vessel for the Navy, Sheikh Hasina said those who filed the cases against her could not realise the necessity of developing the capacity of the Armed forces.
Praising the role of the Armed Forces in facing natural disasters and carrying out rehabilitation programmes, Hasina hoped the members of the forces would continue to work with their tireless efforts and maintain their good reputation.
She also mentioned steps of her government for modernisation and reforms of other organizations under the Ministry of Defence like Bangladesh Meteorological Department, CMH, SPARSO and Department of Survey.
PM’s security affairs adviser Tarique Ahmed Siddique, the chiefs of the three services, PM’s principal secretary Md Abul Kalam Azad, defence ministry senior secretary Kazi Habibul Awal and PM’s press secretary AKM Shameem Chowdhuri were, among others, present.