State Minister for Labour Mujibul Haque Chunnu has warned that the Tuba Group owners will face action if they do not pay their workers by Sunday. 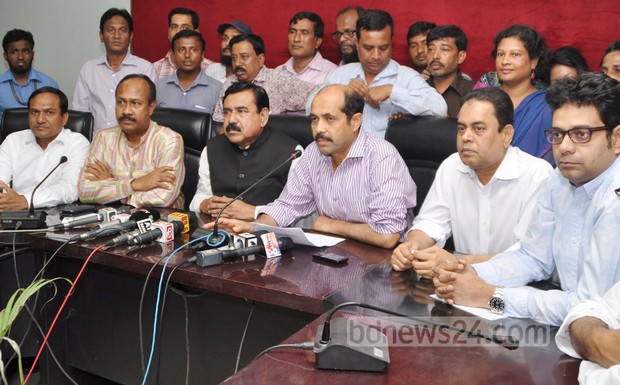 He was speaking at a press conference at the BGMEA building on Thursday afternoon.“Already two months of salaries have been paid. The government has ordered the owners to pay the salaries for July by Aug 10,” he said.The government would not let Tuba MD Delwar Hossain off easily on this matter, he said.“The government will take all necessary steps to make him pay the salaries by the 10th. He must pay the salaries,” he said.Tuba Group workers have been on a hunger strike demanding payment of their salaries and festival allowances due since July 28.BGMEA began paying them two months’ salary on Wednesday.The workers’ committee rejected their offer and only 550 workers, out of the almost 1,600, showed up to receive it on the first day.But after police raided the factory and beat the workers out, they crowded the BGMEA building.By 6pm Thursday 1,315 workers had collected salaries, BGMEA said.Chunnu said, “The workers’ sufferings have paid off. They got part of their salaries and they will get the rest.“I will ask workers’ leaders not to declare programmes that will harm garment workers.”Delwar Hossain was in jail until Tuesday charged with homicide in the Tazreen Fashions fire case. He secured bail from the High Court by allegedly suppressing facts.Workers have claimed that the owners held off their payment to create pressure for his release.Tuba workers have called an indefinite strike in garment factories all over the country after they were forcefully evicted.