A suicide bomb attack at an election rally in the northwestern city of Peshawar, Pakistan, has killed at least 20 people, including prominent local politician Haroon Bilour, police said.

The attack on Tuesday at a campaign event organised by the Awami National Party (ANP) also wounded at least 69 people, according to the local police chief.

Bilour was a provincial assembly candidate for the July 25 general elections. His father, Bashir Bilour, also a prominent ANP politician, was killed by a suicide bomber in 2012.

Police said the bomber struck when Bilour was about to address some 200 supporters.

“According to our initial investigation, it was a suicide attack and Haroon Bilour … was the target,” police official Shafqat Malik told AFP news agency. 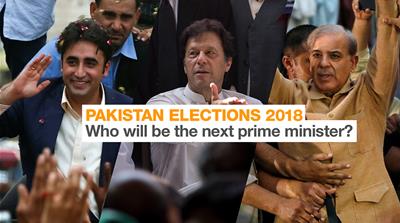 Pakistan elections 2018: Who will be the next prime minister?

“As he got out of the vehicle, the suicide bomber is said to have gotten within striking distance, detonating his device,” he said.

Some people were seen crying.

Bilour belonged to an influential political family in the Khyber-Pakhtunkhwa province, of which Peshawar is the capital.

The ANP was the main target of Taliban attacks in the 2013 election.

The bombing came hours after the Pakistan military spokesman warned about security threats ahead of the national elections.

“Pakistan has seen a relative calm and that, of course, has encouraged the politicians to come out. But the attack today showed that this is going to be a tense affair,” said Al Jazeera’s Hyder.

“It is going to affect the campaigning for many of the political parties.”