text-align: justify;”>Veteran journalist Nirmal Sen died at LabAid Hospital in the capital on Tuesday evening at the age of 82.

Nirmal Sen breathed his last around 6:30pm, Al Imran Chowdhury, a director of the hospital, told The Daily Star.

He was admitted to the LabAid Hospital on December 23 with different old age complications.

Sen, also president of Sramik-Krishak Samajbadi Dal, suffered a brain stroke in 2003. He was taken to Singapore for treatment, but he was brought back home three months later due to financial constraints.

Later, he underwent treatment at Savar CRP for eight months.

BSS adds: A life-term bachelor Sen was the president of the left leaning Sramik Krishak Samajbadi Dal, suffered a brain stroke on October 11, 2011 leaving him paralysed.

Sen made his debut in journalism during Pakistan period and worked for Dainik Paigam and subsequently the then Dainik Pakistan and later the now defunct Dainik Bangla where earned repute for his famous column under pen name “Aniket”.

He was the founder president of the Federation of Bangladesh Federal Union of Journalists (BFUJ) in post independence period in 1972 and 1973 and played a pioneering role in ensuring press freedom and journalists’ rights.

Being a politician, Sen played a glorious role in all pro-democracy movements and upholding the cause of the downtrodden people since Pakistan period. 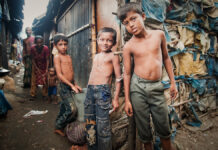