In this file photo taken on 19 July 2018, Myanmar`s Chief senior general Min Aung Hlaing, commander-in-chief of the Myanmar armed forces, salutes to pay his respects to Myanmar independence hero General Aung San and eight others assassinated in 1947, during a ceremony to mark the 71th anniversary of Martyrs` Day in Yangon. Photo: AFP

Tougher sanctions are needed against Myanmar’s wealthy and powerful military as its web of economic interests has generated a fortune that helps fund atrocities, UN investigators said Monday.

They urged the international community to sever links with the armed forces’ dizzying economic holdings — that they said dwarf those of any other civilian company in Myanmar.

Cutting ties will “impair (the army’s) ability to carry out military operations without oversight and thus reduce violations of human rights”, said Marzuki Darusman, chair of the fact-finding mission, ahead of the launch of the report in Jakarta.

The team last year called for Myanmar’s senior generals to be prosecuted for genocide after a 2017 crackdown forced some 740,000 Rohingya Muslims into Bangladesh.

In addition to extensive local partnerships, at least 15 foreign firms have joint ventures with the military, according to the UN report, while 44 others have some form of commercial ties.

“These numbers really are the tip of the iceberg,” investigator Christopher Sidoti said.

Two main military-owned conglomerates — Myanmar Economic Holdings Limited (MEHL) and Myanmar Economic Corporation (MEC) — as well as numerous subsidiaries and “crony companies” have interests in everything from jade and ruby mining to real estate and tourism.

But the companies do not release full financial results to the public, shielding themselves from public scrutiny.

The UN probe argued the army’s “business empire” allows it to evade accountability and oversight.

The 111-page report also detailed how dozens of private companies donated more than $10 million to the military amid operations against the Rohingya.

Sidoti said he found it shocking that so many firms contributed.

“It’s not as though businesses didn’t know what was going on. They did,” he said.

The report demanded criminal investigations into these companies and urged for a complete ban on arms sales to Myanmar.

“Global governments and companies who find themselves connected to a military company can therefore no longer plead ignorance,” said campaign leader Paul Donowitz.

A spokesman for Myanmar’s military said he was unable to comment.

The report comes after the US announced a travel ban on Myanmar’s army chief last month, the strongest censure yet from a Western power since the Rohingya crisis.

The military remains politically powerful in the country despite a transition to democratic rule launched in 2011.

It still controls a quarter of parliament and three key ministries, including defence. 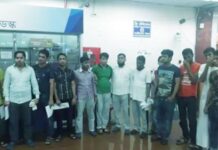 Saudi Arabia mounts pressure on Bangladesh to take back 42,000 Rohingya

Malaysia will not recruit any more foreign workers