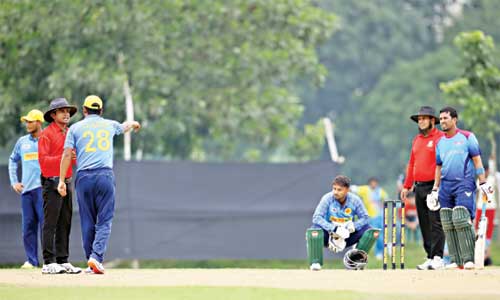 Controversy continues to chase this edition of Dhaka Premier League as the match between Abahani Limited and Prime Doleshwar was called off after umpires felt insecure at BKSP on Sunday.
Doleshwar were 59-2 in 17 overs after dismissing Abahani for 191 runs in 42.4 overs in rain interrupted 45-over game when two umpires left the field in the face of verbal abuse by Abahani players.
The fate of the match is now uncertain as match referee Montu Datta left the matter on Cricket Committee of Dhaka Metropolis to decide.
According to some witnesses umpires left the field as Abahani players started hurling abusive words towards them after a stumping appeal was turned down.
Umpire Tanvir Ahmed did not pay any attention to Abahani’s loud appeal after wicketkeeper Liton Das whipped of the bail as left-arm spinner Saqlain Sajib beat Roqibul Hasan in the air to take him moving forward.
The incident occurred in the fourth ball of 16th over that triggered Abahani players to be infuriated.
Though the umpires managed to run the show for eight more deliveries the voice of Abahani players and supporters grew louder as Roqibul hit a six in the penultimate delivery of the 17th over.
Two umpires left the field after the end of the over never to return.
Match referee Montu however claimed both umpires felt sick at time which denied him an opportunity to resume the game.
‘Both of them reported sick,’ Montu told New Age. ‘Tanvir [Ahmed] had pain in his chest while at the same time Sohel[Gazi] looked to have convulsion,’ he said.
‘If it was a case of one umpire getting sick I could have run the game with the reserve umpire but when both complained about their discomfort I was left with no other option but to stop the game,’ he said.
Match officials held a meeting with both skippers-Abahani’s Tamim Iqbal and Doleshwar’s Farhad Reza after the incident but could not find any solution.
Montu added that he gave his report to CCDM and told them that the match cannot be resumed with these two umpires in charge.
Doleshwar were comfortably placed with Roqibul looking good at the wicket on his way to unbeaten 25 from 44 balls and looked to find a good partner in Sachin Baby, who was digging hard to get settle with his six runs from 16 balls.
Doleshwar needed another 133 runs with eight wickets in hand and were looking solid to take a revenge of their earlier loss to Abahani at the same ground in controversial circumstance.
‘I don’t know what prompted the match referee to stop the game,’ said Doleshwar coach Mizanur Rahman.
‘This type of incident is not new in our country but hardly a game was stopped due to them,’ he said.
Pace bowler Al-Amin Hossain (3-30) and left-arm spinner Sanjamul Islam(3-39) picked up three wickets apiece as Doleshwar bowled out Abahani for a reasonable 191 runs.
Nazmul Hossain (71) and Liton (48) put 83 runs to give Abahani innings some respectability after Al-Amin left them reduced to 19-2 with his opening spell.