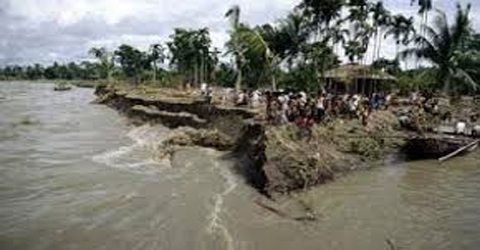 Thousands of people, marooned due to the tidal surge in four upazilas of the district for the last one week, are now passing days amid food and shelter crises.

Many areas of the district got flooded due to the tidal surge, badly affecting a lot of people.

The areas that saw inundation still remain water-logged even after the recession of water, causing immense sufferings to locals.

Several thousands people have so far become homeless as their dwelling houses either got damaged or washed away by the tidal water. Many homeless people have taken shelter in the houses of their relatives.

Though affected people are facing food crisis, they are yet to be provided with any relief by the authorities concerned.

Finding no alternative abode, some 2000 people hit-hard by the disaster took shelter at different school buildings. The affected families are now facing acute crisis of food and pure drinking water.

Shahnaz Begum, an elderly woman of the union, said members of her family passed the last four days eating only one kg of puffed rice.

Nazma Begum of the same union said they have remained unfed over the last four days as they could not cook.

Charfasson upazila nirbahi officer (UNO) M Rezaul Karim said they provided 500 affected families with Tk 500 each and added that 40 tonnes of rice have been allocated for the victims.

He also assured of providing all kinds of assistance, including dried food and medicine, to the affected people.

Many affected people in Manpura upazila have similar stories to tell.

Helpless people urged the government to immediately provide relief to them.

Talking to UNB, disaster-affected Abdul Kadir of Hazarihat union in Manpura said “We’re poor people. We can’t get work as many areas still remain water-logged due to inundation caused by tidal surge. As a result, we’re suffering extremely.”

Locals said more than 25,000 families have been affected by inundation caused by the tidal surge in four unions in Manpura.

The victims are ye to get any relief from the authorities concerned.