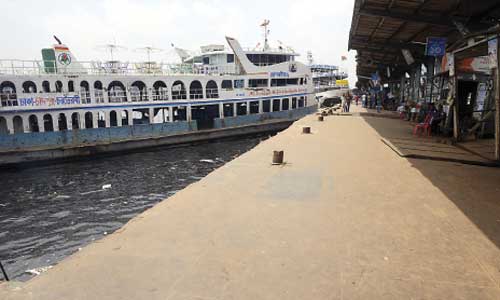 Inland water transport workers on Friday night suspended till May 10 their indefinite strike for launches while the strike for other vessels would continue.
Bangladesh Water Transport Workers’ Federation made the announcement as the indefinite countrywide strike continued for the second consecutive day on Friday sending the movement of passenger and cargo vessels into disarray.
Federation president Md Shah Alam Bhuiyan told New Age that they suspended the strike for passenger vessels as they were asked by government high-ups to do so considering the ongoing elections to union parishads.
Some passenger vessels plied on select routes while cargo handling activities come to a complete halt at the country’s sea and river ports.
Bangladesh Water Transport Workers’ Federation had enforced the strike since Thursday 12am demanding increased wages and the realisation of 14 other demands.
BWTWF president Md Shah Alam Bhuiyan told New Age Friday that the labour and employment ministry had invited them to attend a meeting which was scheduled to be held today at the department of labour to discuss their demands.
Our Chittagong correspondent reported that transportation of exportable and imported cargo between the Chittagong port and the rest of the country was suspended for the second day on Friday.
At least 1,500 vessels, including oil tankers, fishing and cargo vessels laid idle at 16 ghats along the Karnaphuli and other rivers flowing through Chittagong.
At least 51 ships sat with its full load of cargo as no lighter vessel went to the outer anchorage, said Chittagong Port traffic inspector Mahbubul Alam.
Cargo handling at Chittagong Port jetties was slower than usual.
Chittagong Chamber Of Commerce and Industry president Mahbubul Alam in a letter to the shipping Minister Shajahan Khan, sent on Thursday, said the strike was affecting the commodity supply chain and importers would incur losses for paying demurrage for ships overstaying at the port.
The price of consumer goods would rise if the strike continues, the letter added.
Several hundred of strikers brought out a procession from Chittagong Press Club premises.
Our Barisal correspondent reported that except three passenger launches on Barisal-Dhaka route – belonging to the owners of pro-ruling party alliance – no other vessel left Barisal river port on Thursday night and Friday.
The strikers held a demonstration in Barisal launch terminal.
Our Khulna correspondent reported that no loading and unloading activity took place at the Mongla sea port on Friday.
Mongla Port Authority officials said that eight ships were waiting to be unloaded at the outer anchorage since Thursday.
Only a few passenger vessels left the Sadarghat terminal on Friday to Barisal and Chandpur routes.
About 11 launches had arrived at Sadarghat till afternoon, said Bangladesh Inland Water Transport Authority officials.
Our Chandpur correspondent reported that no passenger and cargo vessel arrived or left Chandpur on Friday.
Shah Alam said they demanded an increase in the minimum wage of passenger and cargo-carrying vessel workers at Tk 10,000 from Tk 2,800.
They also demanded payment of bonuses on profits, increased allowances, appointment letters to all the workers, compensation in the event of deaths or injuries in accidents, eight-hour duty, over-time for extra duty, dredging of the rivers and properly marking the river routes to ensure safe navigation, introduction of powerful salvage vessels and curbing piracy on inland waterways.

Deal on Rooppur nuke plant feasibility set to get go-ahead