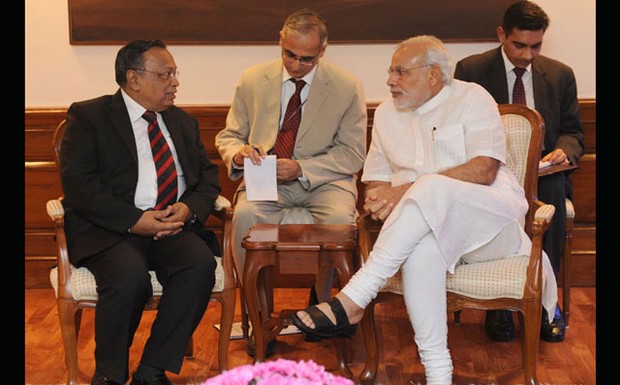 Sheikh Hasina has saved Bangladesh, India’s Prime Minister Narendra Modi has said, promising to do “everything” for the country’s growth, peace and prosperity.

Modi made the comment when Foreign Minister Abul Hassan Mahmood Ali met him on Friday, the foreign ministry said.

“Bangabandhu founded Bangladesh and his daughter, Sheikh Hasina, saved Bangladesh,” Modi was quoted as saying by the foreign ministry in a media statement.

Ali is in Delhi on his first official visit to attend the third foreign ministers-level Joint Consultative Commission (JCC) meeting.

Modi highlighted the significance of cooperation between the neighbours and said “the past, present and future of India and Bangladesh are interlinked”.

It was not clear in what context Modi eulogized Hasina, but the remark puts to bed all speculations surrounding Bangladesh’s relations with the new regime in Delhi that took over in May.

He sent his external affairs minister Sushma Swaraj in June within a month of his taking office in her first “stand-alone” visit to any country.

Swaraj categorically mentioned that they would continue the relations from where they were left off by the Congress-led government..

The prime minister reiterated that “India would do everything for the growth, peace and prosperity of Bangladesh”.

Modi invited all heads of the SAARC states during his swearing-in ceremony and said he would work closely with all neighbours.

On Friday, he also stressed on regional cooperation for “collective development of this region”.

He was particularly happy over the “significant progress” recently made in power sector cooperation between countries, which was a new in the relations.

Modi noted business opportunities in Bangladesh and suggested that the Indian businesses should explore the possibilities of greater investment there.

He particularly pointed out the potential of “enhanced people-to-people contact including through tourism between the two friendly neighbours”.

He also stressed on the opportunities that existed for trade and commerce through sea and river routes.

On regional cooperation, Modi said there were “complementarities” between his government’s ‘Look East’ policy and the goals of BIMSTEC, a seven-nation grouping.

The foreign minister is leading a strong Bangladesh delegation for the Saturday’s JCC meeting that comprises eight secretaries including the foreign secretary.