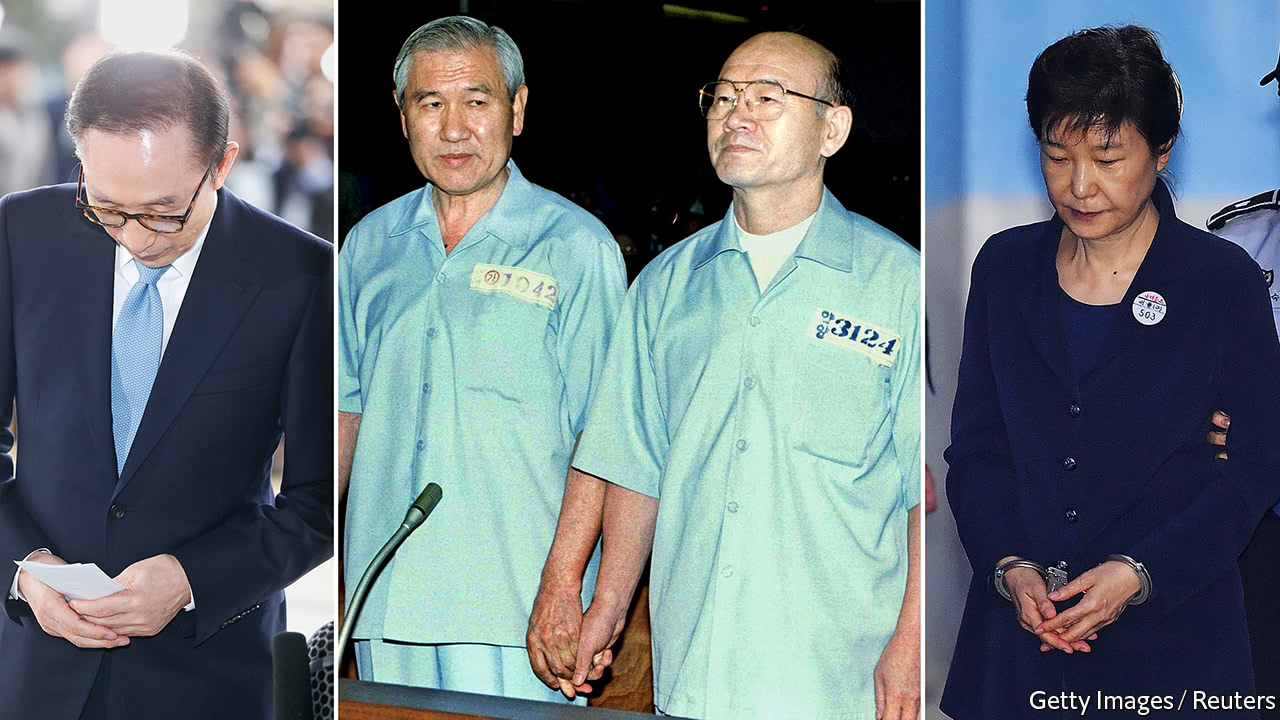 Apr 7th 2018| SEOUL   Economist
IT IS a busy time for anyone interested in the fight against corruption in South Korea. In mid-March a court in Seoul began hearing the case of three former spy chiefs who stand accused of funnelling 4bn won ($3.8m) from the National Intelligence Service to the office of the former president, Park Geun-hye, who was impeached a year ago. A week later prosecutors arrested Lee Myung-bak, another former president, over allegations that he had collected more than $10m in bribes while in office and had hidden his ownership of a profitable auto-parts maker. And on April 6th Ms Park is expected to be sentenced to many years in jail for taking bribes and abusing her power. (Prosecutors recommended in February that she get a 30-year sentence.)

All four of South Korea’s living ex-presidents have now either been convicted of corruption offences, or are in jail being tried or investigated for such crimes. In addition to Ms Park and Mr Lee, Chun Doo-hwan and Roh Tae-woo, former generals who held office in the 1980s and 1990s, were found guilty under their civilian successor, Kim Young-sam, of extracting bribes from South Korea’s big industrial conglomerates, the chaebol. And three deceased presidents were also touched by corruption scandals. Both Mr Kim and his successor, Kim Dae-jung, entered office pledging to eradicate corruption, but both saw their sons convicted of influence-peddling during their time in office. Roh Moo-hyun, who succeeded the second Mr Kim, committed suicide a year after leaving office. He had been accused of receiving bribes, funnelled through his wife and other relatives, from a wealthy shoemaker.

In short, corruption has long been a feature rather than a bug in South Korean politics. “Asking for money from chaebol executives in return for political favours was considered quite normal until very recently,” says Kang Won-taek of Seoul National University. He believes the country’s authoritarian past is to blame. The absence of democratic checks and balances encouraged politicians to identify the state’s interests with their own, he argues.

That may partly explain the odd way in which Ms Park approached her trial, refusing to co-operate with prosecutors or even to show up to hearings, which many observers believe damaged her case. “She didn’t have a sense of guilt,” says Mr Kang. Mr Lee displayed similar contempt for the judiciary when he refused to answer prosecutors’ questions in March.

Before Ms Park, no president was vigorously investigated while in office. The president, after all, can staff the courts and the prosecutor’s office with cronies, and therefore curb scrutiny of his or her own activities, says Park Jung-eun of People’s Solidarity for Participatory Democracy (PSPD), a pressure group. The danger was being succeeded by a political opponent. “Prosecutors have tended to comply with what the government of the day wants,” she says. Even then, bigwigs did not have too much to fear: studies show that high-powered defendants can expect shorter sentences. Pardons also used to be common.

Some ardent right-wingers argue that the current corruption probes fit this pattern. But many South Koreans have a sense that what is being put on trial is not so much two politicians but an entire system of politics, of which Ms Park and Mr Lee are merely lamentable examples. Four-fifths of South Koreans believe that improving political transparency is a precondition for a fairer society, according to a recent poll.

A break with the past

The convictions of Messrs Chun and Roh in the 1990s for their role in the massacre of democracy activists, as well as for corruption, symbolised a reckoning with the nastier side of military dictatorship. By the same token, says Mr Kang, the downfall of Ms Park and Mr Lee may help purge the last remnants of authoritarianism. “It’s a sign that we’re at last putting bad, old political habits behind us,” he says.

The probe against Mr Lee, in particular, enjoys widespread support. Fully 80% of South Koreans believe that the charges against him warrant punishment. No supporters showed up at the prosecutor’s office to protest his innocence, unlike for Ms Park, who is still revered by older Koreans as a representative of her late father, Park Chung-hee, the dictator who presided over a period of unprecedented economic growth. Kim Jiyoon of the Asan Institute, a think-tank, says that while voters have always perceived politics as corrupt, they have recently grown more concerned by this fact. Maybe, she speculates, “people used to think corruption was a price worth paying for success.”

But it will take more than a handful of corruption convictions to ensure that the old order symbolised by Ms Park and Mr Lee is abolished. The current president, Moon Jae-in, whose main electoral promise was to end the impunity of the political establishment and the cosy links between politics and business, is in a good position to keep up the momentum. He enjoys the support of over two-thirds of Koreans and is famously “clean”; he even forgoes professional meetings with friends to avoid the slightest whiff of suspicion.

Yet success is no foregone conclusion. A constitutional-reform bill intended to limit the power of the presidency is unlikely to pass the National Assembly. The bill needs a two-thirds majority to pass, but the opposition refuses to support it, arguing, somewhat ironically, that constitutional reform is too serious a matter to be done at the president’s command. Draft legislation to create a separate agency to prosecute high-level crime, which Ms Park of PSPD believes is needed to counteract the leniency of prosecutors and courts, has been stuck in the assembly for more than a year. When voters were asked in 1995 if the arrest of Roh Tae-woo would rein in corruption, three-quarters said they thought that it would. Whatever sentence is imposed on Ms Park this week, they will presumably take a more jaundiced view.

Over 30,000 starving to death in South Sudan ‘catastrophe’