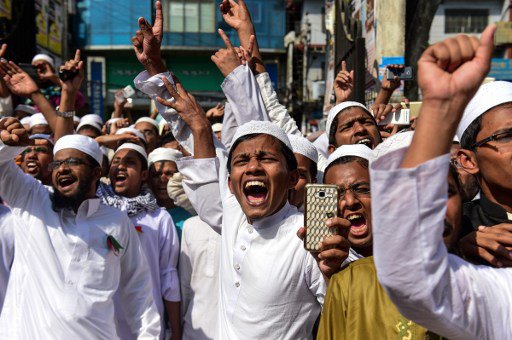 Hundreds of supporters of hardliner Hefazat-e-Islam staged protests on Friday in Dhaka, Chittagong and Narayanganj, calling for the statue of a Greek goddess installed at the Supreme Court to be destroyed or removed.

This is a part of their ongoing protest demanding the removal of the Lady Justice statue from the Supreme Court premises.

Earlier on February 14, they had submitted memorandums to the prime minister and the chief justice. They stated the “idol” was anti-Islamic and threatened to stage demonstrations and bring out processions if their demand went unheeded.

Hefazat-e-Islam activists chant slogans as they take part in a protest in Dhaka on February 24, 2017. Hundreds of supporters of the hardliner Islamist group staged protests on February 24 calling for the statue of a Greek goddess installed at the Supreme Court to be destroyed or removed. The sculpture of Themis, the blindfolded deity of justice and order, has ruffled feathers in the Muslim-majority nation since it was unveiled late last year on the premises of the country’s top court Photo: AFP

Court officials, however, defended the statue as “a symbol of justice.” The image of Greek goddess Themis, depicted with her eyes shielded and holding the scales of justice, represents fairness, law and custom across the world.

Hundreds of Hefazat supporters chanted slogans and wielded placards with phrases such as “Demolish the statue on the court premises and replace it with the Qur’an,” states a report from AFP.

Hefazat’s Central Committee Joint Secretary General Junaid Al Habib said the “idol” had to be removed by any means.

Hundreds of activists from hardliner Islamist group Hefazat-e-Islam gather in front of Baitul Mukarram National Mosque in Dhaka to stage protest demanding the removal of the statue of Themis, the Greek goddess of justice and order, on February 24, 2017 Photo: AFP

In a country with a 92% Muslim population, people would not tolerate any “idol” in the country’s apex court premises, Habib added.

Conservative Bangladesh has seen increasing tension between hardliners and secularists in recent years: A spate of killings of atheist bloggers, religious minorities and foreigners combined with a series of changes in school textbooks, which are overwhelmingly secular, to reflect Muslim traditions.

According to sources, several leaders of Jamaat-e-Islami, a BNP ally which has been absent from recent street demonstrations, and members of its student wing Islami Chhatra Shibir are supportive of the recent radical Islamist moves to remove the Supreme Court statue of Lady Justice, avenge the persecution of Rohingya Muslims and make changes in school textbooks.

Sources also said all paper materials and information for these movements are supplied by Jamaat-Shibir to the other parties, including Hefazat.

Security has been increased in the area around Baitul Mukarram, according to local police official Rafiqul Islam.

He added that at least 1,000 people had joined the rally there and a similar rally had also been held at Chittagong.

‘You too will burn’

Chittagong unit of Hefazat organised their rally at the Anderkillah Shahi Mosque premises.

Hefazat Joint Secretary General Mainuddin Ruhi threatened: “Remove the Greek idol at once from the Supreme Court premises. Please douse the smouldering fire in the hearts of the Muslims. Otherwise, the fire will soon catch you.

“Hefazat believes in systemic movement. We will be compelled to hold another rally at Shapla Chattar if our demand is unheeded.”

Azizul Haque Islamabadi, Hefazat’s organising secretary, said the premier was unaware that the “idol” had been installed on the Supreme Court premises.

“The idol was installed on the advice of a handful of atheists only to put the government in an awkward position,” he said.

When contacted, Jamiat Ulema-e-Islam Nayeb-e-Amir Nur Hossain Kashemi told the Dhaka Tribune that they would launch a tougher movement against the government if their demand was not met.

The Narayanganj unit of Hefazat also held a mass rally in front of the city’s DIT Jame Mosque after Jumma prayers on Friday.

At their programme, they threatened that if their demands went unmet, they would rally their forces and go destroy the Lady Justice statue.

Hefazat’s Narayanganj district unit President Mawlana Abdul Awwal said: “You can establish however many idols at the different temples in Bangladesh, but we will not tolerate the presence of an idol in front of the highest court in the country.”

Hefazat-e-Islam activists in a mass procession in Narayanganj city demanding the removal of the Greek statue from the Supreme Court premises on February 24, 2017 Photo: Dhaka Tribune

On Friday, Islami Andolan Bangladesh Chief Rezaul Karim told the Dhaka Tribune that if the sculpture was not removed, the public would “create a river of blood” in protest.

No justice for Lady Justice

Hefazat is hardly the only group to oppose the statue of Lady Justice on the Supreme Court premises.

Other Islamist parties and groups opposing the installation of the statue are Awami Olama League, Bangladesh Khelafat Majlish, Islami Andolon Bangladesh and Jamaat-Shibir.

Recently, Ansar al-Islam, the Bangladesh affiliate of al-Qaeda in the Indian Subcontinent (AQIS), has also extended support for the ongoing movement of radical Islamists who demand that the “idol” of Lady Justice be removed from the Supreme Court premises.

Yet even with a similar agenda, not all of these radical Islamist groups can see eye to eye.

An al-Qaeda member, Mohammad bin Maslama, accused Hefazat Secretary General Junaid Babunagari of double standards, saying: “You are playing with Islam. Islam is not so insignificant that you will need to submit a memorandum or application to the kufr [government].

“You have cheated the people by signing the fatwa against the mujahids of Islam. You are trying to please the government and Islam at the same time.”

The senior member, however, said they would continue to support Hefazat, disregarding differences, as long as the radical platform was working to continue the spread of Islam.

The flip side reactions

Earlier, civil society members, lawyers and government officials dismissed the demands for the removal of a sculpture installed on the Supreme Court premises, calling it “irrational” and “baseless.”

“The demands brought up by the Islamist parties are irrational and baseless. There is no reason to think that the sculpture will be removed just because someone demanded that it be so,” Attorney General Mahbubey Alam told the Dhaka Tribune.

Former law minister Barrister Shafique Ahmed told the Dhaka Tribune that the sculpture was nothing but the symbol of unbiased conscience of justice, honoured by the countries all over the world, including Islamic countries like Iran.

Khushi Kabir, head of rights organisation Nijera Kori, told the Dhaka Tribune: “There are many sculptures in our country which carry the significance of our identity, history and tradition. They have no authority to demand the destruction of these historical and aesthetic sculptures.”

She feared that if this demand was fulfilled, these groups would raise questions about other sculptures such as Oporajeyo Bangla, Raju Bhashkorjo, or Amar Ekushey.

“The demolition of the Lalon sculpture from in front of Hazrat Shahjalal International Airport [in 2008] encouraged the religious zealots to make such demands,” she added.

Ekattorer Ghatak Dalal Nirmul Committee demanded actions against the people who threatened the highest court and judiciary system and stated in a statement: “Calling this sculpture an idol is politically motivated.”

The Islamist groups’ demands came at a time when the apex court issued two major verdicts – a banning of the use of scales as an electoral symbol and the erasing of the names of 20 convicted war criminals and anti-liberation people from roads and educational institutions across the country.