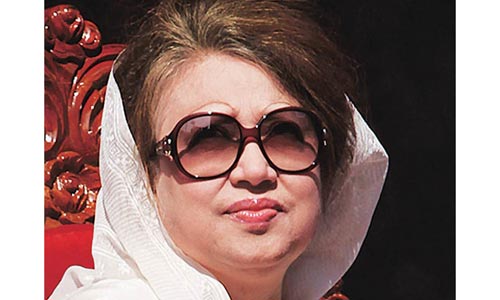 The High Court is set to deliver its verdict on August 5 on two petitions filed by BNP chairperson Khaleda Zia challenging the inclusion and legality of the Gatco graft case against her.
An HC bench comprising of Justice Md Nuruzzaman and Justice Abdur Rab fixed the date for delivering the judgment, United News of Bangladesh reports.
Khaleda’s lawyer Barrister Ragib Rouf said the HC had kept pending its verdict for delivery at any day after closing arguments were heard by the court.
Earlier on June 17, the same bench concluded the final hearing on the two petitions filed by Khaleda challenging the legality of the inclusion of the Gatco graft case against her after closing arguments in the trial of the case.
On September 2, 2007, the Anti-Corruption Commission filed the Gatco graft case against Khaleda and 12 others for causing a loss of Tk 145.64 crore to the national exchequer by allegedly awarding the contract of container handling at the Chittagong port and the Dhaka’s Inland Container Depot to Gatco.
Khaleda on September 27, 2007 filed a petition with the HC challenging the legality of the inclusion of the case under the Emergency Powers Act and seeking a stay order on the trial proceedings.
In 2008, an HC bench issued a rule and stayed the trial proceedings after hearing a petition of the BNP chief.
In the same year, the proceedings of the graft case were stayed again as Khaleda filed another petition challenging the legality of the case.
Source: New Age

How to Steal an Election in Broad Daylight