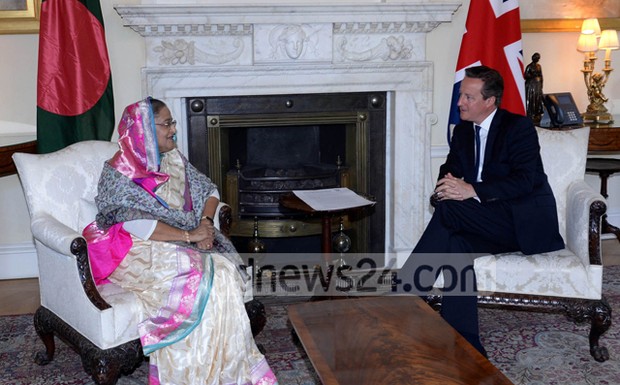 She was welcomed by Cameron on her arrival at the office of the British prime minister at 10 Downing Street at 8:30am local time.

Both the leaders discussed wide range of bilateral issues during their 30-minute long meeting.

This is Sheikh Hasina’s first visit to the United Kingdom after assuming power for the second consecutive term.

Hasina reached London on a three-day visit on Monday to attend the first Girl Summit.

In the summit, to be held at London’s Walworth Academy on Tuesday, Bangladesh will highlight the progress it has made in protecting the rights of girl child.

She will also hold a meeting with Unicef Executive Director Anthony Lake and attend a question-answer session at the summit.

After attending the summit, she will also take part in a programme of the expatriate Bangladeshis.

On Wednesday she will have a meeting with the expatriate Bangladeshis.

Prime Minister is scheduled to leave for Dhaka Wednesday evening.

Among others, prime minister’s entourage also include her Press Secretary AKM Shamim Chowdhury and her Special Assistant Mahbul Haque Shakil.

No tax dodging by Yunus: NBR