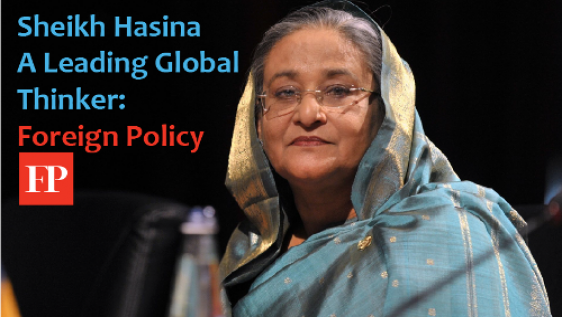 Prime Minister Sheikh Hasina has been named as one of the world’s top 100 leading thinkers by the Washington-based magazine on global politics, economics and ideas, says Foreign Policy.

She has secured her place among the top global thinkers in the category “Decision Makers”.

She has been named as a leading global thinker for her outstanding contribution to address climate change.

The magazine’s website has put up a feature which states that the Bangladeshi premier has made environmental protection a national priority in Bangladesh, for which she has already been awarded the most prestigious UN award in the area, UNEP Champion of the Earth.

The feature reads: “Although Bangladesh produces just 3% of global emissions, rising oceans could displace more than 18 million of its citizen by 2050.

Refusing to sit idly by and despite the economic limitations of a nation with a 30% poverty rate, Prime Minister Sheikh Hasina environmental protection a national priority.”

The feature further states that Bangladesh was among the first developing countries to formulate a climate change strategy and has since constitutionally pledged to protect natural resources.

No more harassment for passports: PM