Israel’s military says it has carried out air strikes in the Gaza Strip in response to fresh rocket fire, hours before a ceasefire was set to expire.

“Terror targets” were hit in Gaza after rockets were fired towards the towns of Beersheba and Netivot, officials said.

Talks in Cairo to end the violence have broken up, and the Israeli delegation is now on its way back home.

“This rocket attack was a grave and direct violation of the ceasefire,” said Mark Regev, a spokesman for Israeli Prime Minister Benjamin Netanyahu.

“The Cairo talks were based on an agreed premise of a total cessation of hostilities,” he added. “When Hamas breaks the ceasefire, they also break the premise for the Cairo talks. Accordingly, the Israeli team has been called back.” 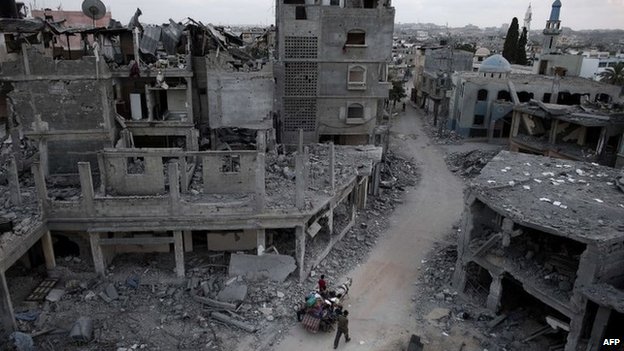 UN officials say nearly 17.000 housing units in the Gaza Strip were destroyed in the recent fighting 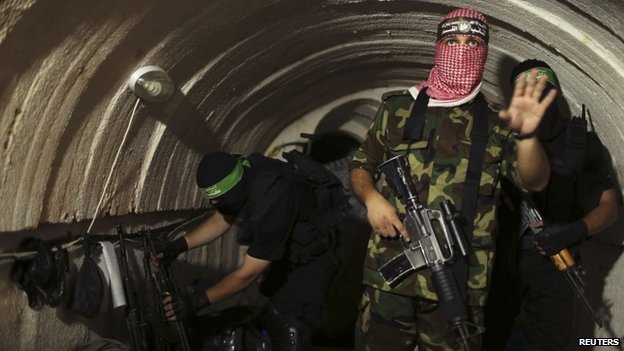 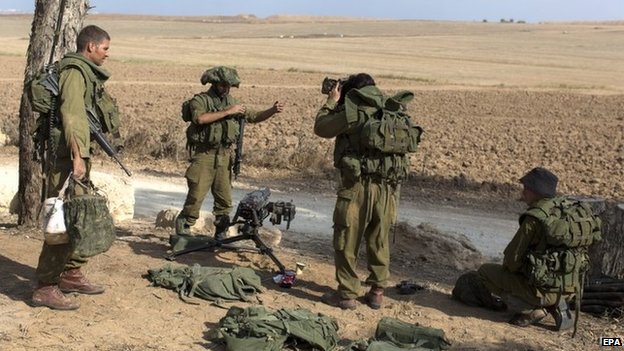 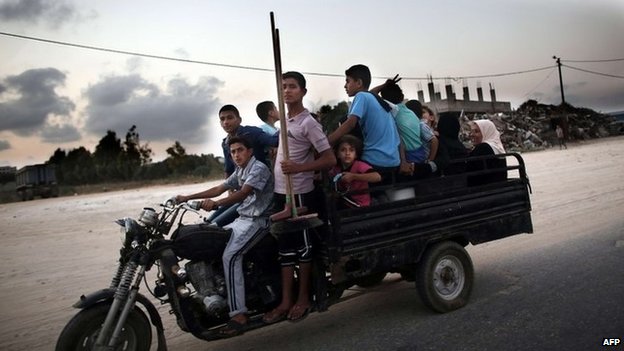 Witnesses in Gaza reported several Israeli air strikes, from Beit Lahiya in the north to Rafah in the south. Hospital officials told the AP news agency that seven children were wounded.

There was no immediate claim of responsibility from any of the Palestinian factions in Gaza, which is dominated by Hamas.

Sami Abu Zuhri, a spokesman for the Islamist movement, told the BBC that it “had no idea or information about the firing of any rockets”.

However, another Hamas spokesman, Fawzi Barhoum, had earlier warned: “If Netanyahu doesn’t understand… the language of politics in Cairo, we know how to make him understand.”

The picture was bleak even before the fighting resumed, and there was not much optimism among the members of the Palestinian delegation.

The gaps between the two parties were too wide to bridge.

The Egyptian mediators had tried to work on getting the blockade of Gaza eased without asking Hamas to lay down its weapons, a key Israeli demand.

They were keen to delay discussing the more thorny issues, like the construction of a seaport and airport in Gaza. But even that plan did not bear fruit.

Before the latest violence, a senior member of Palestinian Authority President Mahmoud Abbas’s Fatah movement, Azzam al-Ahmad, told Reuters that there had been “no progress on any point” in the negotiations, with big gaps remaining between the two sides.

Palestinian representatives said Israel was seeking guarantees that Hamas and other factions in Gaza would be disarmed, while the Palestinians were demanding an end to the Israeli and Egyptian blockades of Gaza, and the establishment of a seaport and airport.

Hamas insists it will not give up its weapons, while Israel wants to maintain some control over Gaza’s crossings to prevent arms smuggling.

The BBC’s Kevin Connolly in Jerusalem says much now depends on whether this latest exchange of violence is an isolated breach of the ceasefire, or a signal that it is over.

Israel launched an offensive on Gaza, “Operation Protective Edge”, on 8 July with the aim of ending rocket fire. It also sought to destroy tunnels dug under the frontier with Israel used by militants to launch attacks.

The Palestinian health ministry says that 2,016 Palestinians have been killed since the offensive began, including 541 children and 250 women.

The Israeli authorities say 64 Israeli soldiers have been killed, along with two Israeli civilians and a Thai national.