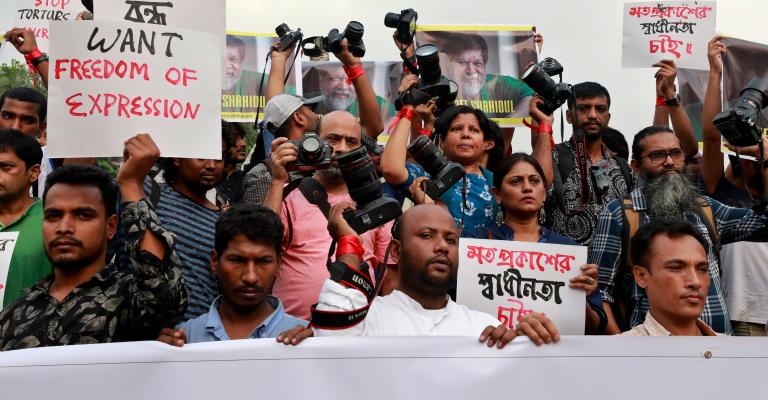 THE detention of members of the family of a number of expatriate journalists and activists, who have criticised the government and its policies and action, is worrying. At least two members of the family of expatriate journalists were detained in the past week. The Detective Branch detained the brother of the editor of the London-based Weekly Surma on September 13 in Noakhali on suspicion of his ‘possible connection’ with his expatriate brother, alleged to have ‘tarnished’ the image of Bangladesh by publishing an editorial on money laundering in an August issue of the weekly newspaper and by holding a human chain in front of the UK parliament on August 30 to mark International Day of the Victims of Enforced Disappearances. The police on September 9 arrested the brother of a special correspondent of the Weekly Surma in Moulvibazar, alleging his ‘connection’ with his expatriate brother, who spoke on enforced disappearances on Facebook in August. In October 2021, the sister of another expatriate journalist was detained for ‘spreading anti-state propaganda and possessing drugs’. In 2020, intelligence and law enforcement agency personnel visited the house of the elderly mother of the Sweden-based Netra News editor for interrogation.

Such detention and harassment of family of expatriate journalists and activists is unacceptable, unethical and illegal. If anyone at home or abroad does anything that might be illegal, the law enforcement agency would certainly take legal action against them and hold them to justice, but they should by no means harass the family. The government is reported to have made a list of the people who carry out ‘anti-state activities’ abroad and ordered Bangladesh missions to hold them to justice. The government should not construe the criticism of the government and its policies and action as anti-state activities. Criticism and dissent are what strengthen democracy, which allows space for dissent and criticism. But, what the government does is a worrying sign of political intolerance. There should be no way for the government to criminalise criticism and dissent and harass critics and dissenters who live in the country and harass, by way of detention, the family of critics and dissenters who live abroad. Rights organisations have criticised such a phenomenon. The United Nations High Commissioner for Human Rights on September 12 said that ‘rights defenders, lawyers, journalists and victims’ families should not face reprisals or sanctions for their advocacy work.’ Hitler planned to rule from Hollywood