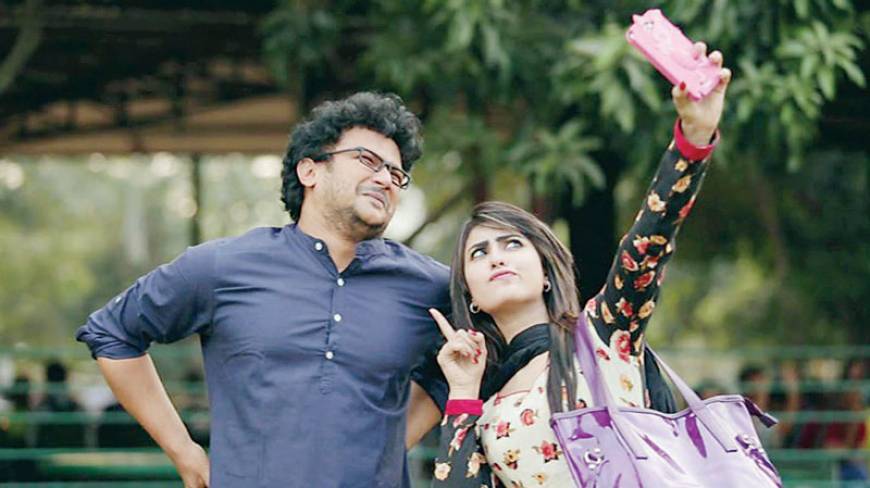 Actor Riaz and Mou paired up for the TV drama Mon Kharaper Drishyaboli. The story of the TV drama follows Raiz, whose wife recently departed in a foreign country to pursue her career. On the other hand, Riaz unexpectedly meets his old friend Mou. Written and directed by Koushik Shankar Das, the TV drama avoids theatrical treats and depicts the lives of the characters more realistically instead. The drama also casts Mehrin Islam Nisha, Fakhrul Bashar Masum and Mili Bashar.

Pulok’s wife Ayesha feels that her husband doesn’t accommodate enough time for her. So she buys five days from Pulok by paying him his five day’s salary. They go on a holiday in Cox’s Bazar for five days. During these five days Ayesha ignores Pulok, comes home late at night, eats outside and doesn’t give Pulok time. Pulok realises his mistake. Written and directed by Mohammad Mostafa Kamal Raj, the drama casts Jahid Hassan, Moushumi Hamid.

For the first time, noted actor Afzal Hossain and model-actress Mehzabien Chowdhury paired up for a TV drama. Directed by Imraul Rafat, the TV drama depicts Afzal Hossain as a realist painter who decides to draw the painting of a girl in the backdrop of six different seasons. After some searching for his desired model, he finally finds Abantika, played by Mehzabien. Shibu Kumar Shil wrote the screenplay for the drama based on a story idea by Imraul Rafat.

Masum who lives in Old Dhaka and wastes all his day by fooling around, loves  Riya, who lives in the same area. But Riya despises his habit of annoying and scaring people. Masum one day explains the reasons behind his actions and eventually Riya has a change of heart. Written by Litu Sakhawat and directed by Sakhawat Shibli, the drama casts Chanchal Chowdhury, Oporna and Amirul Islam Chowdhury.

Unable to handle the pressure of poverty and the inability to marry off his daughter, a father named Fayez finally decides to commit suicide. Right before, the angel of death appears before him, awarding Fayez a wish. Once the wish is granted, Fayez tries to become successful. Written and directed by Tariq Anam Khan, the drama casts Tariq Anam Khan in the lead role.

Khushi and Joy are two cyclists who study at the same university. Joy has a crush on Khushi but falls short of words everytime he goes to Khushi to express his feelings. He tries many tactics to win over Khushi but all end up as blunders. At one point, Khushi’s father grounds her in her home.However, the two end up falling in love with each other. Written and directed by Asif Iqbal Jewel, the drama casts Nayeem and Shokh.