Despite the president’s anti-Muslim policies, the margin between Trump and Biden among Muslim voters was closer than experts predicted

A Trump supporter waves a flag outside the US Capitol building on 14 November. Photograph: Jacquelyn Martin/AP

A Trump supporter waves a flag outside the US Capitol building on 14 November. Photograph: Jacquelyn Martin/AP

Dr Khalid Khan is an internal medicine physician in Houston, Texas. Even in the face of a pandemic that has cost almost a quarter of a million American lives, and an administration that often seemed to demonize Islam, the doctor and self-proclaimed devout Muslim cast his ballot for Donald Trump.

“When you eat a dish, you might not like every ingredient. But you like the whole dish. We should take the good and leave the bad,” Khan said, comparing the US president to a mediocre meal. 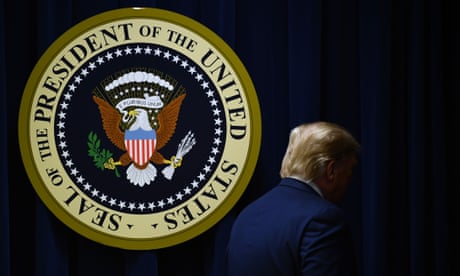 Trump spent much of his presidency pushing anti-Muslim policies. Trump’s travel ban that targeted mainly Muslim countries in 2017 sparked outrage not just from American Muslims but from Senator Bernie Sanders; the Senate minority leader, Chuck Schumer; and the then US senator for California and now the vice-president-elect, Kamala Harris.

“Make no mistake – this is a Muslim ban. Broad-brush discrimination against refugees and immigrants from Muslim-majority countries, most of whom are women and children runs counter to our national security interests, and will likely be used as a terrorist recruitment tool,” Harris said at the time.

But despite Trump’s policies against the religious group, some Muslims like Khan, still voted for him. In fact, the margin between Trump and Democratic challenger Joe Biden among Muslims was closer than experts predicted, revealing Muslim voters are not a monolithic bloc and can be courted by Republicans, even when apparently targeted by their policies.

We should take the good and leave the bad

A survey conducted by the Associated Press revealed that while the majority of Muslims interviewed voted for the president-elect, 35% said they voted for Trump. That percentage was higher than the results from an exit poll conducted by the Council on American Islamic Relations, or Cair, that counted 18% of Muslim votes going for Trump.

Though Muslims account for less than 1% of the total US electorate, in places like Michigan, these voters can potentially be key to winning a state in a tight election battle, as happened in 2016 and again in 2020.

Exit polls can be notoriously misleading due to a number of factors such as the time the poll was conducted and whether or not a voter is telling the truth about if and who they voted for. But Trump-voting Muslims who spoke to the Guardian revealed a wide variety of reasons for backing a president who had termed their own religious group “a massive problem”.

Even as the United States leads in coronavirus case count and number of deaths, Khan said he believed Trump handled the pandemic as best he could, but wished he would advise Americans to wear a mask more.

“As a physician, if we took everything a patient said out of their mouth, we would never be able to diagnose them,” Khan said. “Anybody in his place would have done the same. But I don’t believe we should reject him over that. He is lacking in really making people wear a mask.”

Khan’s wife, Annette, a nurse and a white Christian convert to Islam, said she believed her husband’s support for Trump was valid.

“I do acknowledge that during his presidency he said some things that would be perceived as anti-Muslim. I believe it was out of ignorance,” Annette Khan said. “His lack of dealings with Muslims and lack of knowledge are the cause. When he banned Muslims from coming into the country he was referring to those who were already established by the Obama administration as being terrorist-harboring countries. Not all Muslim countries.”

On the heels of the newly appointed supreme court justice Amy Coney Barrett, abortion remains a hot topic and a key issue for faith-based voters. Annette Khan credits her social conservative views on abortion and sexuality to her faith as well and sees them reflected in the Republican party under Trump.

“The Republican party is anti-abortion, and anti-gay marriage, which honestly is an oxymoron. For gay marriage does not exist for conservative and fundamental people of faith groups, regardless of their affiliation, be they Christians, Jews or Muslims. This is consistent with Islamic beliefs,” she said.

Salman Razzaqi is a Minnesota native that now lives in Houston. Razzaqi, a proud Indian American Muslim, voted for Trump. But his reasons for doing so are not all based on his religion.

I wish 95% of people voted for Trump. He’s the one who harmed Muslims the least

“Shame on us for bringing our religion and ethnicity into this. I wish 95% of people voted for Trump. He’s the one who harmed Muslims the least,” Razzaqi said, citing Obama’s interventionist history in the Middle East – an important issue for many Muslim voters.

“They [Democrats] always start a war. [Obama] destroyed Libya. He destroyed Syria. He started a war in Sudan. He started a war in Yemen. Last eight months, there was not one bombing in Iraq. There was not one drone attack in Pakistan in four years. Syria is much better now than it was four years ago. Libya was left alone,” Razzaqi said. “He is an angel compared to Obama and Bush. We should be thankful to him.”

While it’s true that the Obama administration carried out 1,878 drone strikes predominantly in the Middle East, Trump has repealed an Obama era rule that mandated the release of data on drone strikes and resulting deaths in 2019.

Razzaqi said he voted for Trump in 2016 and 2020, but he wasn’t always a fan of the Republican party.

“Obama came and I liked him a lot. Very humble, very nice guy, but he just started handing out money,” Razzaqi said. “I’ve always been a Democrat but I realize that they’re spoiling their own people and destroying American values that require you to get up and go and work and make your earning.”

Razzaqi makes his living by renting out and managing his properties. When asked if he would be affected by Biden’s plan to tax those making over $400,000 annually, he said he would. Like many who voted for Trump, Razzaqi sees the president as a “shrewd businessman” and Democrats as too generous on welfare issues.

“He’s not a seasoned politician. He’s a borderline crook and knows how to mend the laws and play the IRS. Making money in America is not a problem. Increasing wealth is not a problem,” Razzaqi said. “Running a country is a business.”

Razzaqi acknowledged Trump’s Muslim ban but chalked it up to a lack of self-restraint.

“He’s got the biggest mouth. That’s the biggest problem,” Razzaqi said. “If he had the etiquette, he would be remembered as the best president ever.”

While Razzaqi ardently supports Trump, he believes Biden has fairly won the election, despite Trump’s false and unfounded claims that he lost due to fraudulent voting,

“I think [Trump] lost the election,” Razzaqi said. “He should concede and walk away.”