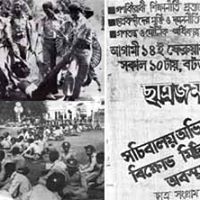 Birth of the revolution MH Kawsar looks back at February 14, 1983 and what the day had wrought for the regime of a dictator. Every year, on February 14, the youth of Bangladesh ceremoniously celebrate the Valentines’ Day. Sale of cards and gift adorned with cupid signs and heart shapes reach their sales peak on the day as people wish ‘happy Valentine’s Day’ to their special ones. But, unfortunately most of the youth are unaware that a glorious history of February 14, 1983, is willingly buried behind the corporate love business.

HM Ershad took power in March, 1982 establishing military rule in the country that lasted for 256 days. During this period, many students died while protesting the autocratic rule. However, the day of February 14, 1983 was different from other days as it witnessed how peoples’ collective voice can break the shackles of guns and military muscle. Students’ voice against Ershad soared in the end of 1982, when Dr Abdul Majid Khan, the then-minister for education during the time, announced a notorious education policy, popularly known as ‘Majid Khan’s education policy’, for the period of 1982-1987. The policy would allow education only to the students capable of bearing 50 per cent of expenses. The policy also suggested making the Arabic language compulsory from the primary level which was completely conflicting the basics of 1952’s language movement.

Following police attack on a students’ rally on November 1982, the Kendrio chattra songram parishad was formed on November 9, 1982 at the Madhur canteen of Dhaka University, initiating the first few steps to the long movement that finally brought down the Ershad regime in 1990. It was February 14, 1983, the first day of Falgun of the Bengali year. On that morning, people came out, clad in festive dresses to celebrate pahela falgun that welcomes the spring season. At the same time, even in the festive mood, a procession of students was formed at the foot of Aparajeya Bangla in front of the Arts building, protesting Ershad’s repressive rule. The procession was scheduled to be brought to Doel Chattar. In the meantime, police and security forces took position too at several spot of the university area. At about 2:00am, the procession began moving toward education Bhaban after passing the Bangla Academy and Atomic Energy Commission.

As per the media reports, Ershad governments brutality in the mid February of 1983, claimed at least 10 lives that includes Zafar, Jainal, Kanchan, Dipali Saha and Mozammel Ayub. February 14, 1983, was the day that witnessed the first movement against Ershad’s military rule leading to his downfall and putting the country on the track of democracy. Unfortunately, due to the failure of political leadership, Ershad enjoyed power even after the sacrifice of so many young lives. However, the day was soon recognised and has been observed as the day for protest against autocracy.

February came again, the next year. Remembering the sacrifice of Zafar and Zainal, students again protested against the Ershad government. Several processions were brought throughout the month of February. On February 28, 1984, a procession began from Dhaka University and proceeded towards Fulbaria bus stand via Chankharpool. A group of armed riot police was following the rally all the while. As it reached the Fulbaria bus stand, two police trucks, which were following the procession, ran over the students. Within seconds, students Delwar and Selim was smashed under the wheels of the police trucks.

The following years of 1985, February saw the death of Rofun Bosunia, a final year student of sociology at the University of Dhaka, when he protested against the dictator Ershad on the streets. The day February 14 had been observed as the day for protest against autocracy until 1990. After so many years, situations have changed. Ershad, the military dictator, is now sharing power with the student leaders who once protested against him shouting ‘soirachar nipat jaak (Get rid of the dictator)’. People forgot the sacrifices of Zafar and Zainal, who tried to buy democracy with their lives. No one bothered to tell the youth about the history of the struggle, the moments of revolution that testified the detail that peoples’ collective voice can be stronger than guns. Reference – 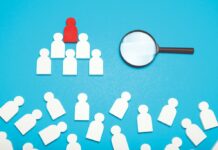