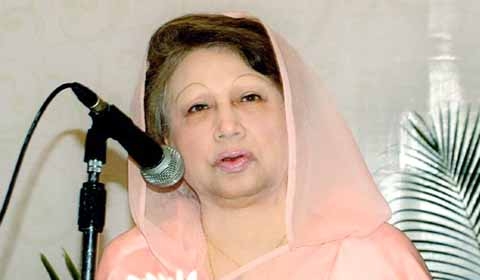 In a statement, she said, “The country’s independence and sovereignty are now at stake while democracy is on the verge of death after the January-5 farcical election.”

Khaleda, also a former Prime Minister, issued the statement greeting the country’s people on the occasion of BNP’s 36th founding anniversary that falls on Monday.

She alleged that the current regime is ignoring the national interests by signing various anti-state agreements and doing anti-people acts.

Claiming that the law and order has sharply deteriorated, the BNP chief said the bodies of people are found regularly on roads and elsewhere across the country.

She said a grand festival of mass killings, secret killings, enforced disappearances, terrorism, graft, repression and extortion are now rampant all over the country.

Khaleda alleged that the government in a bid to stifle the independence of the judiciary through naked politicisation is now going to make a law to re-empower parliament to impeach judges. “The efforts for enacting the law are on to make the Prime Minister all powerful — above all the institutions.”

She further alleged that the national broadcast policy has been framed to gag the media. “The illegal government will snatch the freedom of expression and free-thinking with this policy.”

The BNP chief urged the country’s people and BNP leaders and activists at all levels to get ready for a movement against the anti-people policy.

Mentioning that the country’s people are now going through a suffocating situation, Khaleda said they are on the movement together with people to re-establish people’s rights, assuage their sufferings, restore democracy and voting rights through holding a fresh election under a non-party administration.

She said BNP which was founded on September 1, 1978, has been working for the welfare and prosperity of the country and its people.

Mentioning her party’s various contributions to building the nation, Khaleda said BNP will also play a strong and vital role in serving people in the days to come.

In a another statement, BNP acting secretary general Mirza Fakhrul Islam Alamgir also congratulated BNP leaders and activists and the country’s people on the occasion.

PM for social movement against terror