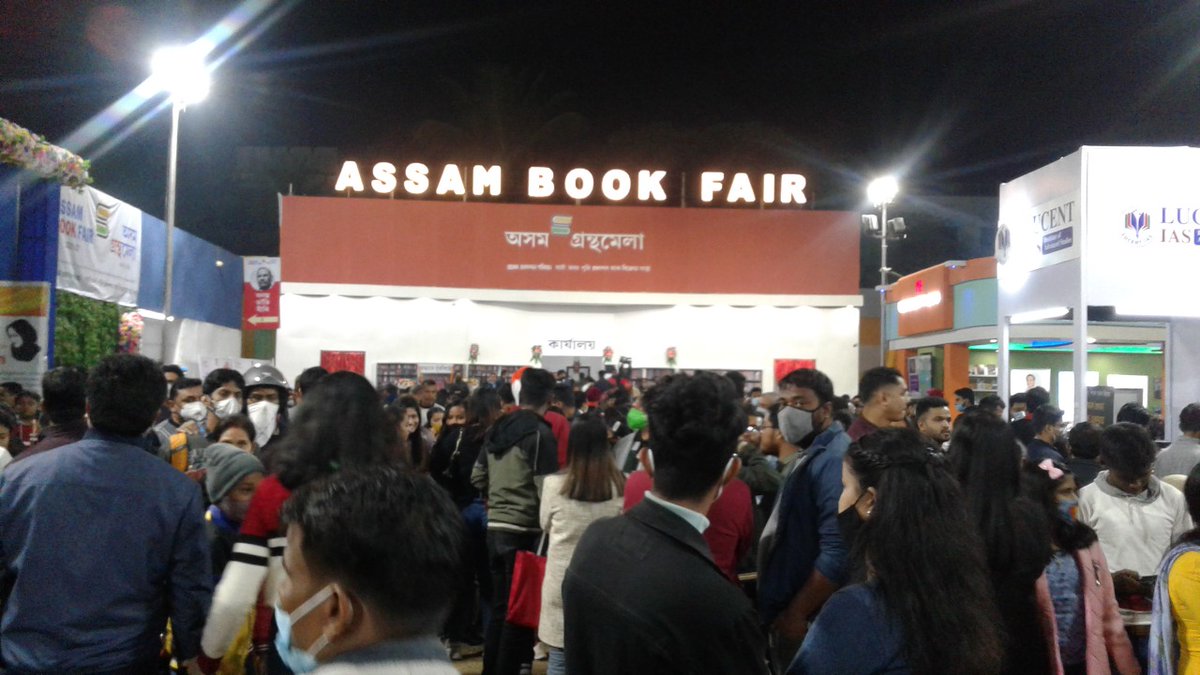 Guwahati: Amidst the threat of spreading novel coronavirus (precisely
the Omicron variant)  across India, Asom Granthamela (Assam Book Fair)
came to a successful end in Guwahati, the virtual capital of
Northeast. Organised jointly by Asom Prakashan Parishad (Publication
Board Assam, the government-sponsored literary institution) and All
Assam Publishers & Book Sellers Association maintaining necessary
Covid-19 precautions, the 12-day event genuinely paved way for
observation, debate, and resolutions over the future of books.
Braving the cold wave, thousands of book-lovers from different parts
of the region thronged at Assam Engineering Institute playground in
Chandmari locality every day to celebrate the festival of reading,
information and wisdom. Nearly 150 book-publishing groups and
retailers comprising a few from neighbouring Bangladesh, as well as
Delhi and Kolkata besides the local publication houses showcased their
printing works. They were put in six rows in memory of renowned
Assamese intellectuals namely Hemchandra Goswami, Padmanath Gohain
Barua, Panindranath Gogoi, Giripada Devchoudhury, Rabin Devchoudhury
and Sananta Tanti.

Inaugurating the book fair on 29 December 2021, State education
minister  Ranoj Pegu emphasized developing a culture of book
reading and he  insisted on translating various literary works in
Assamese to different larger languages and also translating ethnic
language works of the region into Assamese. Pegu, also the Chairman of
Prakashan Parishad, expressed happiness that more people are now
reading books as they acquired the decent habit with an aim to escape
the loneliness created by nationwide corona-lockdown days.
The minister also honoured  Nandita Devi with Prakashan Parishad
literary award for her novel ‘Bongol Bohu Door’ along with its
publisher Nagen Sarma of Jyoti  Prakashan.  Kuladhar Saikia, president
of Asom Sahitya Sabha, the State’s highest literary forum, graced the
inaugural function to stress on popularising the books among young
people with varied and rich contents. He argued that new technology
should be used for making books available to them.  Noni Gopal
Mahanta, the adviser to the State education department, revealed that even
after the invasion of the internet, the books remain popular around the
world.

Mentionable is that due to the Covid-19 pandemic, the publishers &
book-sellers could not organise Northeast Book Fair in 2020 and it
even failed to accommodate the annual event because of violent
anti-CAA (citizenship amendment act) agitation  in 2019 that almost
defaced the city with a panicky situation among the residents. However,
Prakashan Parishad successfully held Guwahati Granthamela in 2020 with
visible public support.

Organisers of both the events joined hands this time to go for a
combined trade show, where State chief minister  Himanta Biswa Sarma
took a positive initiative. Sarma, who could not grace the inaugural
function,  visited the fair later and interacted with the book-lovers.
A large number of youths at the venue applauded Sarma, where he
appreciated the efforts of the organisers for making the festival of
wisdom possible. Next year, both the events may take place separately
if the corona situation improves, he commented.

There were however initial resentments among a section of book lovers
as the name of  Granthamela was temporarily changed from Guwahati Book
Fair (or Northeast Book Fair) to Asom Granthamela. But it was done
under a difficult situation and  Prakashan Parishad has publicly
announced that it has no intention to dishonour the legacy of Guwahati
Granthamela started its voyage in 1984.

People of Assam will always remember contributions of the great souls
including author-journalist Chandra Prasad Saikia who were
instrumental in organizing the first book fair in the region.
Prakashan Parishad joined hands with National Book Trust (of India) to
launch the book fair movement and it was a huge success. Later
Prakashan Parishad took enough challenges to organise the book fair
independently in 1987 and it continued.

In the initial years, the regular venue of Guwahati Granthamela was
the Judges field on the south bank of the mighty river the Brahmaputra, which
was later overcrowded by the book enthusiasts. Soon a large number of
publishers and booksellers from various parts of the country started
participating in the book fair and lately, the venue was shifted to the
present location to accommodate more participants and appreciators.
“With the availability of cheaper mobile internet services across the
country there were apprehensions that the young people might turn away
from the practice of reading. But till now it has been proved wrong.
Various exciting (extreme) audio-visuals, made easily available
through the internet, can attract a huge number of people, but they
finally, get solace in serious reading only,” said Dhiraj Goswami of
publishers & book-sellers association, adding that books worth rupees
five crores were sold in the fair.