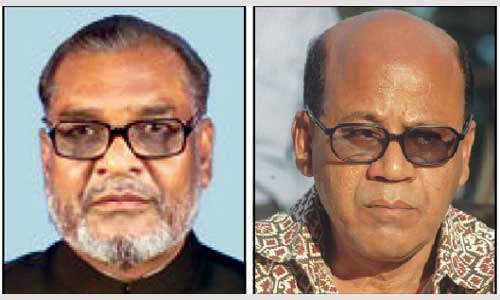 The Appellate Division on Sunday handed convictions to  food minister Md Qamrul Islam and liberation war affairs minister AKM Mozammel Huq finding them guilty of contempt of the court and gross interference with dispensation of justice.
In a short order delivered in a packed court room, the apex court imposed the fine of Tk 50,000 on each minister.
An eight-judge bench of the apex court chaired by the Chief Justice asked each of the two ministers to deposit the fine of Tk 50,000 Islamic Eye Hospital and the Liver Hospital, both charitable institutions, within seven days.
The failure to pay the fines within the stipulated time would require the two ministers to serve simple jail term for seven days, said short order.
Qamrul and Mozammel heard the sentence as they were present in the courtroom when Chief Justice SK Sinha pronounced the order at 10.45AM amid pin drop silence.
Qamrul and Mozammel were found guilty of ‘gross contempt’ of the apex court, said the order.
On March 8, in a suo moto rule  the Appellate Division asked the two ministers to explain why they would not be punished for the remarks they had passed expressing doubts that justice could not be expected from the apex court chaired by the Chief Justice in what was then the pending  appeal of war crimes death row convict Mir Quasem Ali.
Later, on the same day, the apex court upheld Quasem’s death sentence.
In the full verdict in Mir Quasem’s appeal, now being penned, said the Chief Justice, ‘You will see who took how much money and from whom.’
Since the contemnors sought unconditional apologies at the earliest opportunity, the court took a lenient view in awarding the sentences to them, said the Appellate Division in the order.
The apex court was unable to accept the unconditional apologies offered by the contemnors as the contemnors are holding constitutional posts as cabinet ministers, said the order.
It pointed out that the two ministers were bound by oath to preserve and protect the Constitution.
The impugned statements, comments and remarks of the ministers apparently showed that they ‘intentionally’ made those comments to malign and undermine the office of the Chief Justice and to defame the court to the public, said the order.
It said that the two ministers interfered with the administration of the justice.
Their derogatory and contemptuous statements would embolden anyone to make similar statements or remarks and interfere with the administration of justice, said the court.
Before pronouncing the order,   the Chief Justice told the attorney general that all the apex court judges carefully  examined the remarks passed by  the two ministers and other speakers at a discussion held on February 5 on a subjudice matter.
The Chief Justice said that contempt proceedings were not drawn against the other speakers as the apex court did not want to proceed against them leaving more pressing matters.
The contempt proceedings against the two ministers should serve as the message that none is above the law irrespective of their positions, said the Chief Justice.
Asked whether Qamrul and Mozammel could continue to serve as ministers after they were convicted for contempt of court, Mozammel’s lawyer Rafique-ul Huq left in haste saying he would make no comments.
Later, he told New Age that there was no need to face another contempt charge by making comments.
Qamrul’s lawyer Abdul Baset Majumder said he could give a reply after receiving the full order.
It depends on the morality of the two ministers whether they would continue in office after getting conviction for contempt of court, attorney general Mahbubey Alam told reporters when his views were sought.
He said that the cabinet division can take a decision in this regard.
Justice Nozrul Islam Chowdhury, who recently retired as a High Court judge, said that for breaching oath of office a minister automatically ceases to be a minister.
He said this was applicable for any public office holder whose tenure comes into effect after taking oath of office.
He said that a minister takes his oath of offices under Article 148 (2) of the Constitution with the pledge that he would ‘preserve, protect and defend the Constitution.’
Lawyer Shahdeen Malik said that the two ministers have lost their moral authority to continue as ministers after they were convicted for contempt of the court.
Shahdeen said that if the ministers don’t resign the prime minister could sack them.
Supreme Court Bar Association’s outgoing president Khandker Mahbub Hossain said that the prime minister should sack Qamrul and Mozammel if they dont resign immediately.
SCBA secretary AM Mahbub Uddin Khokon said that  Yousuf Raza Gilani resigned as the prime minister of Pakistan  after the Supreme Court convicted him for contempt of court.
In Bangladesh , inspector general of police Shahudul Haque, sergeants Shoaibur Rahman, and Md Russel Arafat were sacked from service after the Appellate Division rejected their appeals against conviction handed by the HC for contempt of the court, in 2004.
On August 13, 2015, the Appellate Division sentenced Janakantha editor Mohammad Atiquallah Khan Masud and executive editor Swadesh Roy to ‘confinement’ in the court until it rose for the day for contempt of court.
In August 2010, the apex court sentenced acting Amar Desh editor Mahmudur Rahman to six months’ jail of contempt of the court.

It’s all about for PM