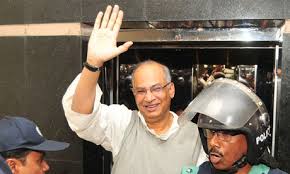 A local court on Sunday deferred until August 3 the hearing on charge framing against BNP leader Salauddin Quader Chowdhury in two vehicle-torching cases.

Police produced Salauddin Quader Chowdhury, who was sentenced to death by the International Crimes Tribunal-1 for crimes committed against humanity during the War of Liberation in 1971, to the court amid tight security in the morning.

Muhammad Rezaul Masud, additional deputy commissioner of Chittagong Metropolitan Police, said some 300 policemen were deployed on the court premises to avoid any trouble.

The BNP leader was brought to the Chittagong jail from Kashimpur jail in Gazipur on Thursday night.

Court sources said two vehicles were vandalised and then those were set on fire in separate incidents in Bashbaria and Salimpur in Sitakunda upazila on November 7, 2010.

Police arrested three people from Bashbaria and another one from Salimpur on that day.

The arrested made their confession before the court under section 164 where they said they torched the vehicles as per the order of Salauddin Quader Chowdhury.

The ICT-1 found Salauddin Quader guilty of war crimes against humanity during the Liberation War in 1971 and awarded him the death penalty on October 1, 2013.

Police arrested him from the capital on December 15, 2010.

Man to die for killing girlfriend

Ban on heavy vehicles during Eid