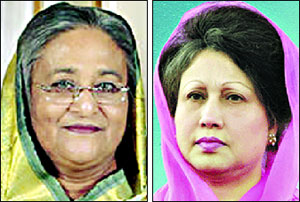 Ignoring violent protests throughout the country, over a score of deaths in the exercise of coercive power of the State, total boycott by the parliamentary Opposition, and express disapproval of international community who through a UN emissary conducted an unfinished mediation effort for a consensus on election-time government to ensure a commonly acceptable and participatory general elections, the ruling alliance refused to postpone (which it could do by dissolving the 9thparliament) the schedule of general election on January 5, and went ahead through the motions of such an election unilaterally, mostly distributing parliamentary seats amongst themselves in what was called by the opposition leaders a “selection rather than an election.”

Where contest was allowed, mainly on account of “rebellious candidates” of the ruling alliance, the voters demonstrated their “contempt” of the sham election exercise by not attending at all in a significant number of polling centres. Ballot papers were stamped in the “privacy” of polling booths by some “obedient” polling officers, and stuffed in ballot boxes in a select number of polling centres. The Opposition claimed that the voter turn-out was 3% to 5% generally in the 147 constituencies where polling took place, voters in the other 153 constituencies having been deprived of opportunity to vote at all as “selected” candidates were declared elected unopposed. The Election Commission claimed that over 40% votes were cast in the contested constituencies.

SH/Authoritarian obstinacy
In an on-line Statement dated January 8, entitled “Bangladesh: Authoritarian obstinacy wins, democracy loses” the Asian Human Rights Commission observed (abridged): The Bangladesh Government and Election Commission have jointly staged their tragicomic ‘general election’ on January 5, 2014. Amidst the opposition boycott, and numerous attacks on polling centres, support for the election amongst the general public was at a historic low. On the polling day at least 24 people were killed. Most of them were victim to the gunfire of law-enforcement agents. As expected, the incumbent regime deployed political cadres to rig votes. Polling staff, law-enforcement agents, and village defence party members directly facilitated the “festival of rigging”. Persons without voter identity cards were allowed to cast vote. In at least 9 constituencies, according to media reports, the EC declared the government’s preferred candidate as “winners” although they were found “defeated’ in the original results collected from the centres.
The international community is not fooled by the statistics engineered by the Election Commission, a pawn in the hands of the Sheikh Hasina government. The conversation between Sheikh Hasina and her Information Minister Hasanul Haque Inu prior to the Prime Minister’s Press Conference on January 6 that has been broadcasted live and is available online tells the truth about how fake this election was.
The overall reaction of the international community was reflected in an official statement of the UN Secretary General Ban Ki-Moon saying: The Secretary General was saddened by the loss of life and incidents of violence that marred yesterday’s parliamentary elections in Bangladesh, which were characterized by polarization and low participation. Ban Ki-Moon regretted that the parties did not reach the kind of agreements which could have produced a peaceful, all-inclusive election outcome, calling on all sides to exercise restraint and ensure first and foremost a peaceful and conducive environment, where people can maintain their right to assembly and expression.

AL’s repressive actions
But the ruling alliance was disinclined to create any such conducive environment, and in fact has launched a new bout of repressive actions to terrorise and subdue the Opposition’s larger body of alliances carrying on a country-wise continuous “siege” and disruption of traffic on roads, riverways and railways. The country’s economy is on the brink, alarmingly at the micro-level and disturbingly at the macro level. The administration is at a standstill, and public safety is in a state of collapse. The Human Rights Watch of New York observed on January 8:
“Bangladesh authorities should immediately end arbitrary arrests of opposition party members and others. Arrests have continued even after the ruling Awami League party and its allies won the largely uncontested elections held on January 5, 2014.
“Dozens and perhaps hundreds of opposition leaders and members were taken into custody before the elections, which were boycotted by the main opposition alliance led by the Bangladesh Nationalist Party (BNP). BNP leader and two-time former Prime Minister Khaleda Zia was placed under de facto house arrest, with security forces surrounding her residence and blocking people from entering and leaving. Many opposition leaders and activists have gone into hiding.
“While in some cases the government has acted appropriately to stop violence by some opposition forces, this spate of arrests is part of a pattern of weakening critics, limiting dissent, and consolidating ruling party power. There is nothing democratic about this kind of widespread crackdown on critics.”
On the matter of democratic pretensions of the ruling alliance, the Commonwealth Secretary General in his official reaction to January 5 election exercise stated that it was “deeply troubling”, and reminded the Bangladesh Government: “In the Commonwealth Charter, it is a shared responsibility of governments, political parties and civil society to uphold and promote democratic culture, including the inalienable right of individuals to participate in free and fair elections. Therefore, it is critical that Bangladesh moves quickly to find a path forward through dialogue to a more inclusive and peaceful political process in which the will of the people can be fully expressed.”

Disappointed and concerned
Canada, a leading commonwealth nation and a development partner of Bangladesh, expressed concern over the ruination of the economy in the continuing conflicts in Bangladesh. Expressing sadness over the violence and controversy that marred the electoral period, Canada’s Foreign Affairs Minister John Baird said, “Canada welcomes the major parties’ willingness to consider holding a new national election and urges all parties to reach an agreement soon that would allow the next election to be truly participatory, with results that all Bangladeshis will see as credible. …. Political instability has bred economic instability, which has caused long-term damage to Bangladesh’s economy and may continue to do so.”
Several other Commonwealth countries and development partners, members of the European Community, members of Organisation of Islamic countries, Japan and China have expressed similar concerns over the controversial polls and continuing violence of political confrontation, calling for dialogue with the Opposition for fresh polls. Only the regional hegemon India, “swam against the tide” (The Telegraph, Calcutta) and recognised Sheikh Hasina’s “victory” in the January 5 general election. Syed Akbaruddin, the official spokesman of the Indian Ministry of External Affairs, told the press on January 6: “Elections in Bangladesh on 5thJanuary were a constitutional requirement. They are a part of the internal and constitutional process of Bangladesh. The democratic processes must be allowed to take their own course in Bangladesh.”
In sharp contrast was the official reaction of the superpower leading the globalisation process, the United States of America. The Deputy Spokesperson of the US Department of State, Marie Harf stated on the same day in Washington: “The United States is disappointed by the recent Parliamentary elections in Bangladesh. With more than half of the seats uncontested and most of the remainder offering only token opposition, the results of the just-concluded elections do not appear to credibly express the will of the Bangladeshi people. While it remains to be seen what form the new government will take, United States’ commitment to supporting the people of Bangladesh remains undiminished. To that end, we encourage the Government of Bangladesh and opposition parties to engage in immediate dialogue to find a way to hold as soon as possible elections that are free, fair, peaceful, and credible, reflecting the will of the Bangladeshi people.”

Indians question Delhi’s policy
But Sheikh Hasina is not to be held back by internal resistance or international censure, as long as she has Delhi and a servile civil administration to prop her up. She is going ahead in a hurry to swear in her new “selected” members of parliament, contravening, according to legal experts, constitutional provisions of her own making. But doubts are beginning to be expressed whether Delhi may continue to support her for long in this game. Already, questions are being raised by the Indian media and the Indian security experts about the wisdom of India’s present Bangladesh policy. As Manoj Joshi wrote in the Indian Today dated January 8:
“Jamaat activists set fire to Awami League office in Bangladesh on election day that was marred by violence. Things have been bad enough for India in Pakistan, Nepal and Sri Lanka, and we now face the prospect of our relations with Bangladesh going down the tube in the coming months. After having had a friendly government preside over a stable neighbour in the last five years, we are now confronted with the prospect of violence and anarchy in a country with which we share a 4000- km border.
“In the wake of domestic protests and international condemnation, Sheikh Hasina has more or less conceded that she will have to undo the elections.
“A re-election, which will almost certainly see the victory of the BNP, is bad news for India. But New Delhi can only blame itself for its predicament.
“The events in Bangladesh have also brought out an uncharacteristic rift between New Delhi and Washington DC. In the past year, the Americans have been warning against the holding of elections in a climate of violence, while India has made it clear that all its eggs are in Sheikh Hasina’s basket.
“In 2013, we have had trouble- prone relations with Sri Lanka, Nepal and Maldives; and ties with our adversaries Pakistan and China remain unchanged.
“The Awami League’s control of the government provided New Delhi some comfort with regard to the advancing Chinese influence in the region, even though India was not able to reward her sufficiently. On the other hand, Khaleda Zia and her BNP are allied to the Jamaat which is virulently anti- Indian. Begum Khaleda’s own attitude towards India cannot but be deeply skewed by the perceived closeness between India and Sheikh Hasina. As far as India is concerned, the issue of Bangladesh cannot be handled by a lame- duck government in New Delhi. But beyond personalities and politics, there is one basic question we need to ask ourselves. Why even 66 years after independence, New Delhi’s influence in its region is shrinking instead of expanding?”