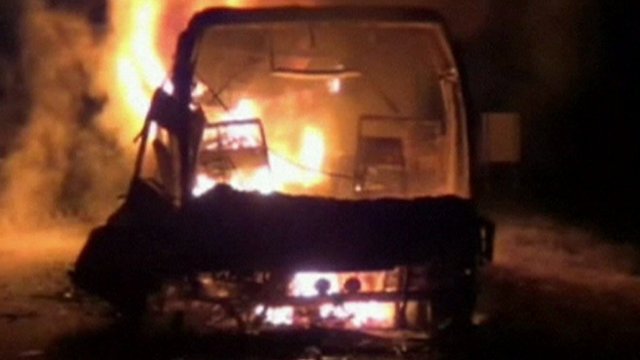 The bus was travelling from Bangalore to Hyderabad, as Sanjoy Majumder reports

At least 42 people have died after the luxury bus they were travelling in caught fire in India’s southern state of Andhra Pradesh, police said.

The bus, carrying more than 50 passengers, was travelling from Bangalore city to Hyderabad, Andhra Pradesh’s capital, when the incident happened early on Wednesday.

Seven people, including the driver, managed to escape the blaze.

Police say a collision with a culvert ignited the fuel tank of the vehicle.

The incident happened at Kothakota in Mahbubnagar district, 140km (86 miles) from Hyderabad, when the air-conditioned Volvo luxury bus hit a culvert, police said.

“The diesel tank burst and flames erupted. Before the passengers could realise what had happened, the blaze engulfed the entire bus,” residents of the village were quoted as saying by The Hindu newspaper.

Most of the passengers were sleeping when the incident took place.

Seven people, including the driver and his assistant, broke the windows of the bus and managed to flee. 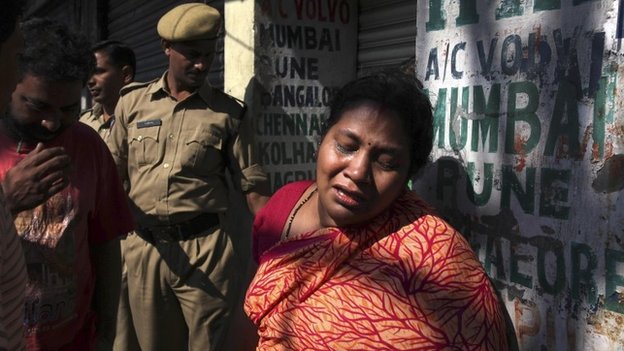 Local police spokesman Venkateshwarlu told the AFP news agency that the police had arrested the driver and his assistant who “tried to run [away]” after fleeing the blaze. Three other passengers were taken to a local hospital.

In 2008, more than 60 people died in a bus fire in northern Uttar Pradesh state.

The fire started when part of a faulty axle dropped on to the road and ruptured the bus’s fuel tank.

More than 130,000 people died in road accidents in India in 2011, according to the government’s National Crime Records Bureau.

Correspondents say that bus crashes are common in India and often caused by poorly maintained vehicles, overloading and reckless driving.