Bangladesh have slumped to an 8-wicket defeat against India in a rain-hit final as the men in blue sealed their sixth Asia Cup title. 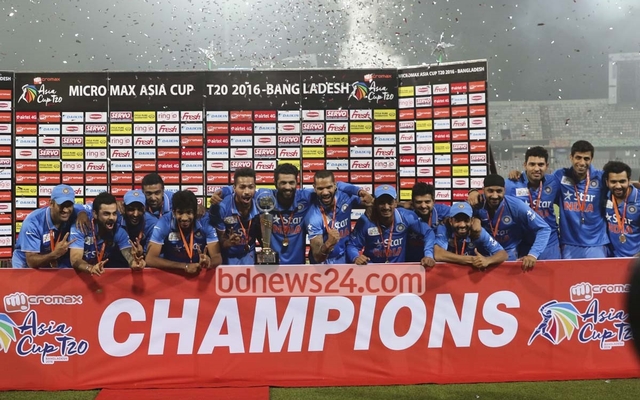 Some late fireworks from Mahmudullah and a sensible knock from Sabbir Rahman had propelled Bangladesh to a decent 120 for 5 at the Sher-e-Bangla National Cricket Stadium in Mirpur on Sunday.

The match was preceded by thunderstorms, heavy rain and a power cut that plunged the venue into darkness and delayed the start by two hours.

After the downpour had stopped, a remarkable effort from the groundstaff prepared the ground in quick time as India won the toss and asked Bangladesh to bat first.

Sabbir (32) and Mahmudullah (33) paired for 45-run unbroken sixth-wicket stand to help Bangladesh to the total after the hosts lost their way in the mid-overs.

Although their openers were edgy at times, Bangladesh were off to a steady start after being asked to bat.

The openers had a fluent start as Indian seamers moved the ball around. They cracked several boundaries before walking back in quick succession.

Soumya Sarkar (14), who hit Ashish Nehra for two consecutive fours, got carried away and tried to smash another in the next ball. But he mistimed it to mid-on where Hardik Pandya took an easy catch.

In the next over, Tamim Iqbal (13) was trapped leg-before by Jasprit Bumrah as he attempted to swat through the leg side without moving his feet.

Sabbir and Shakib Al Hasan then put 34 on the board to get some momentum. The duo operated with quick rotation of the strikes and timely boundaries.

Shakib (21) upped the ante before Ravichandran Ashwin broke the dangerous stand. Shakib attempted a slog sweep but the ball took a leading edge to go straight to short fine leg.

Mushfiqur Rahim (4) struggled to find the timing in the middle. He and captain Mashrafe Bin Mortaza left in quick succession trying some big hits.

With the boundaries dried up thanks to a tidy over from Hardik Pandya, Mushfiqur ran himself out when he tried to go for a double.

Mashrafe promoted himself up the order but holed out to Virat Kohli at deep midwicket in his first ball off Ravindra Jadeja.

Mahmudullah then took charge as Sabbir dug deep at the other end.

Sabbir, oblivious to the fall of wickets at the other end, nonchalantly clipped one over short-fine to give Bangladesh their first boundary in four overs.

Mahumdullah got off the mark with a couple of twos and then drilled one straight down the ground to round off a nice 14-run over off Nehra.

He then tore into Pandya to bring Bangladesh roaring back in the innings. The right-hander launched a breathtaking onslaught on Pandya in the penultimate over by hitting for two sixes and a four to milk 21 off it.

But Bumrah’s seven-run last over kept Bangladesh to exactly 120.

India were off to a jittery start and were unable to break the shackles in their chase.

Al-Amin Hossain once again struck in his first over when he fired in a length ball outside the offstump, forcing a flash from Rohit (1). The ball took an edge back to Soumya at first slip.

Al-Amin and Taskin Ahmed gave away 19 runs in the first four overs before Mashrafe brought Abu Haider Rony, included in the squad for the first time in the tournament, in the attack.

Rony forced Dhawan (60) to edge twice which went for boundaries while Kohli (41 not out) drove another inches over the mid-off fielder as the 14-run over eased the climbing pressure.

The duo smashed 15 more in the next over off Shakib to bring the chase back on track. Shakib conceded 11 more in his second over as Dhawan helped one past short third man to bring up his second Twenty20 International half-century off just 35 balls.

Nasir Hossain bowled two tight overs for 8 runs but went for 15 in his third as Dhawan and Kohli blazed away towards the target.

With Taskin bowling different lengths in the 13th over, Dhawan made room and drove hard towards square but Soumya held on superbly to a low catch at point. It was adjudged the best catch of the match.

The dismissal brought Mahendra Singh Dhoni in. The India skipper hammered Al-Amin for two sixes and a four in the penultimate over to finish things off in style.