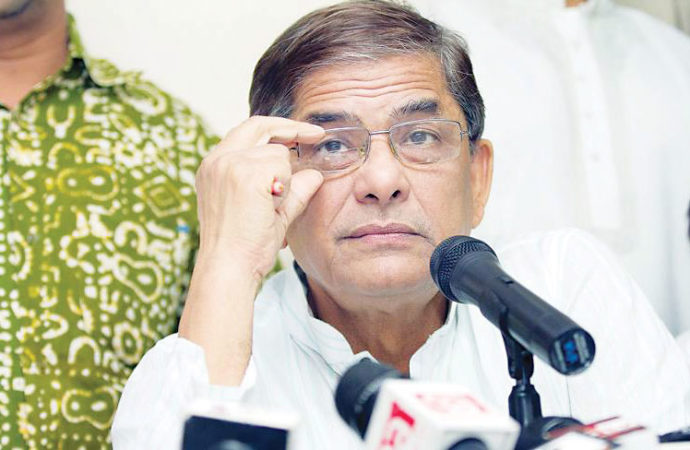 Hitting out at the prime minister for branding their party as a corrupt one, the BNP secretary general on Thursday suggested Sheikh Hasina to see her own face in the mirror.

“The prime minister yesterday (Wednesday) made some objectionable remarks in parliament. She called a major political party corrupt, but it had ruled the country five times since its inception and introduced multi-party democracy and restored press freedom,” said Mirza Fakhrul Islam Alamgir.

Speaking at a discussion at the National Press Club, he said, “You (Hasina) should see your own face in the mirror and know what people’s perception is about you before making such a comment.

“People know it very well who’re plundering thousands of crores of taka from mega projects and different banks. They also know who’re not indulging in corruption.”

On Wednesday, Hasina sharply criticized BNP for dropping Section 7 from its party charter and making its head a convict, as she hinted towards Tarique Rahman.

“Will the party that accepts corruption as policy or support it in its charter and accepts a corrupt leader work for the wellbeing of people? They (its leaders) can commit only plundering, killing people and corruption,” she said during her valedictory speech of the 19th session of the 10th parliament.

Protesting her comments, Fakhrul said revered journalist ABM Musa, who died around four years back, had called Awami League men “thieves.” “Even, Badrudin Omar while talking to journalists at Kolkata airport few days ago also called them thieves by names.”

He also recalled that the army-backed government after 1/11 political changeover in 2007 had filed 15 corruption cases against Hasina while four against Khaleda. “But, she (Hasina) withdrew the cases filed against her keeping the four against our leader.”

Fakhrul said the government has filed 78,000 cases implicating over 1.8 million BNP leaders and activists and filled the jails with them. “You are doing all these things as you know you do not have any chance to win the next election if our party men remain with people.”

He alleged that the government was arresting BNP leaders and activists to ensure its victory in the 11th national polls by any means.

He said Awami League had no legal and moral right to stay in power. “That is why they have destroyed all democratic institutions, including the parliament, administration and the judiciary.”

Fakhrul called upon BNP leaders and activists to stay united for the movement to ensure the release of party chief Khaleda and other leaders, and an acceptable election.

Later, the BNP secretary general went to the party’s Naya Paltan headquarters and took part in some scheduled programs.