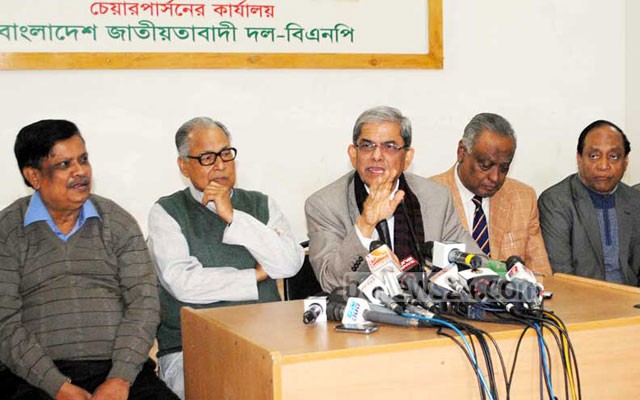 The BNP-led coalition has rejected the municipal election results, saying the government has ‘hijacked the people’s mandate’ by using a ‘subservient’ Election Commission.

It blamed the EC for ‘failing to perform its constitutional duties’ and demanded its resignation.

“At the same time, we demand resignation of the [election] commission and the government for deceiving the people and failing to discharge their constitutional obligations.”

On Wednesday, 234 municipalities went to polls, first time on party lines. Unofficial results for 227 mayor posts have so far been announced.

The Awami League has bagged 177 of the posts while the BNP has managed to win only 22.

In reaction to his party’s ‘humiliating defeat,’ the BNP leader said, “The government conducted held an unprecedented farcical and flawed election and the ruling party snatched the people’s mandate by using a subservient Election Commission and the politicised administration and police.”

“This has proved that no election held under this government and the election commission can be credible or fair.”

Though the BNP has alleged ‘massive irregularities’ in the polls, the EC has claimed that except for some isolated incidents, the elections were held in a fair and peaceful manner. The ruling AL too has expressed satisfaction at the polls.

Voting took place at around 3,500 centres simultaneously amid reports of sporadic incidents of violence and irregularities.

A man was killed in Chittagong’s Satkania in a clash while another died in Barguna on Thursday from injuries sustained during the polls.

Elections to Madhabdi Municipality in Narsinghdi and voting at 38 centres of 18 other municipalities were suspended for malpractices and violence.

Shafi: Awami Leaguers are always with us

AL conspires to keep BNP out of polls: Nazrul Islam