A senior BNP leader has admitted that the situation surrounding Prime Minister Sheikh Hasina’s visit was not handled properly when she went to console bereaving Khaleda Zia. 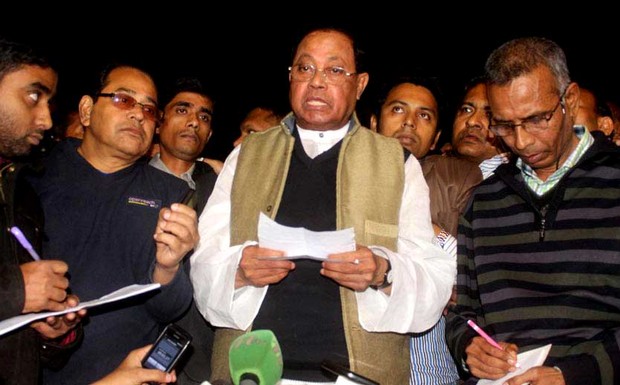 BNP Standing Committee member Moudud Ahmed on Sunday seemed to be blaming the staff of the BNP chairperson’s Gulshan office for turning Hasina away.

He also claimed that the BNP chief had no knowledge of the incident.

Speaking to reporters in front of her office, Moudud said, “It was a mistake not to show courtesy to the prime minister last night.”

The BNP policymaker’s remarks come close on the heels of BNP Joint Secretary General Ruhul Kabir Rizvi dubbing the prime minister’s visit to Gulshan office as ‘a farce, and pretentious’.

On Saturday night, Hasina went to visit Khaleda after her youngest son Arafat Rahman Coco had died in Malaysia.

But she failed to meet her as the gate was locked from inside. She returned after waiting for a while. No BNP leader spoke to her that time.

Moudud said the gate of the office was locked from inside without consultation with any senior leader.

“But(Khaleda Zia) had no knowledge of the matter. She was nearly unconscious then.

“Even we could not meet her at the time,” he said.

“She could not be informed about the arrival of the prime minister as the door of her room was shut.”

“But Khaleda Zia thanked the prime minister when she woke up,” Moudud added.

When Hasina’s motorcade started for Gulshan on Saturday, the BNP chairperson’s Special Assistant Shamsur Rahman Shimul Biswas told reporters outside the office that it would not be possible to let the prime minister meet the grieving mother as she had been put to sleep by doctors.

Media reports said Moudud, along with some other Standing Committee members of the party, was also in the office at the time.

The BNP chairperson has been staying at her office since Jan 3.

After being stopped from attending a party programme on Jan 5, she called a nationwide nonstop blockade. Police then kept the road that leads to her office closed for several days.