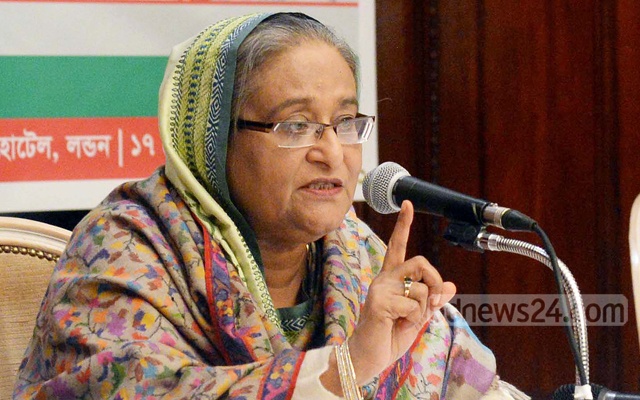 Prime Minister Sheikh Hasina has lashed out at the BNP and Jamaat-e-Islami saying that the alliance is now ‘hatching conspiracy’ against Islam.

“These conspirators, murderers are now plotting against Bangladesh…I would even say against the Islam,” she said on Tuesday while speaking at an Awami League rally in London.

BNP leader Aslam Chowdhury has been arrested over his meeting with an Israeli politician, who belongs to the country’s ruling Likud party.

Charges of a conspiracy to topple the government in collusion with Israeli intelligence agency Mossad have been brought against the newly promoted BNP joint secretary general.

Referring to that, Hasina said, “Who have they joined hands with? They have gone this far to eliminate me.”

The prime minister also blamed the BNP for the recent target killings. “They have burnt people to death in the name of a movement and are yet to apologise to the nation for that. Now they are on to assassinations.”

Hasina made a two-day stopover at the British capital before flying to Bulgaria to attend the World Women Leaders’ Forum.

The Awami League chief lambasted the BNP saying that executions of one of its party leaders and several Jamaat leaders for 1971 war crimes had left them in doldrums.

Hasina said that the BNP will have to face trial for making Jamaat leaders Cabinet members of Bangladesh.

After the BNP-Jamaat alliance formed government in 2001, the then prime minister Khaleda Zia included Nizami and Mujahid in her Cabinet.

Govt ready to unconditionally sit with oppn over polls: Inu