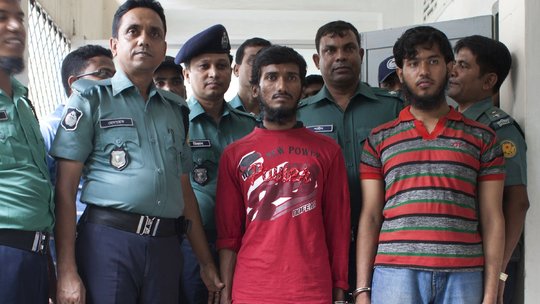 When the steamy, clamorous evening had settled over this city, and Oyasiqur Rhaman had finished his day’s work at a travel agency, he would turn to one of his favorite pastimes: Poking fun at fundamentalist Islam.

Mr. Rhaman, 27, blogged under the name Kutshit Hasher Chhana, or The Ugly Duckling, and he specialized in sharp-edged satire. In one post, he adopted the persona of a self-important believer fielding questions from an atheist. (An example: “See, the captive women, impressed at the heroism of the Muslim fighters, used to engage in sex with them willingly. Don’t you see that it gave pleasures to them as well?”) He posted photos of sausages wrapped in pastries, labeled “pigs in a burqa.”

The writer Avijit Roy’s wife, Rafida Ahmed Bonya, at Dhaka Medical College hospital on Friday after she received a blow to her head from unidentified assailants.

On Monday morning, after he left home for the travel agency, Mr. Rhaman was killed for what he had posted. Three young men — among them students of madrasas here in the capital and in Chittagong — surrounded him and sliced at his head with machetes, cutting deep gouges into his forehead, face and throat. His body was left on the pavement in a pool of congealing blood.

Two men were captured by local residents and handed over to the police, according to Mohammad Salahuddin, who heads the district police station. Those men said an acquaintance known as Masum had instructed them to kill Mr. Rhaman because “he made some comments against Islam” on social media, but that they had not read the comments themselves.

The killing closely followed the pattern of another five weeks earlier, when young men with machetes surrounded a secular blogger and author, Avijit Roy, as he left a book fair.

Mr. Rhaman took Mr. Roy’s murder to heart, changing his Facebook profile image to read “I am Avijit.” Over the next few days, he also mourned the 2013 killing of another blogger, Ahmed Rajib Haider, known online as Thaba Baba, and vowed to keep fighting.

A writer using the name Biswaoy Balok, or Amazing Boy, responded in the comments section: “Son of a dog, you will also be killed.”

The deaths of Mr. Roy and Mr. Rhaman this month have sent a chilling message to the country’s secular bloggers, who say they are competing for the hearts and minds of young people exposed to oceans of material promoting conservative Islam.

Mr. Haider, Mr. Roy and Mr. Rhaman were all swept up in the 2013 Shahbag movement, which called for the death penalty for Islamist political leaders who were implicated in atrocities committed during the 1971 war for independence from Pakistan. The movement was met with a passionate response from young Islamist activists, deepening a divide among members of the same generation over whether Bangladesh is, or should be, a Muslim state.

Omi Rahman Pial, another prominent blogger from the same group, said he heard from five activists on Monday who said they were considering seeking asylum outside Bangladesh. Arif Jebtik, another activist, said that more “have begun shutting their blogs down” under pressure from their families.

It has always been risky for Bangladeshi intellectuals to criticize Islam, but when they fled the country, it used to be to avoid prosecution, not extremist violence, said Sara Hossain, a Bangladeshi supreme court lawyer.

“People who have lived in conflict zones will describe how you move from being a society where you attack people verbally and try to invoke the law against them,” she said. “Now our society is increasingly going toward one where you murder your enemies.”

Many people here had a mixed reaction to Mr. Roy’s death, condemning the violence but also taking issue with his views.

“Look, 93.2 percent of Bangladeshis are Muslim, and 80 percent of those are against what he wrote,” said Abdullah Fahim, 22, a business student at North South University, a private institution here. “I don’t know why our government gave him the liberty to write against Islam.”

Monirul Islam, a police official who is overseeing the investigation into Mr. Roy’s death, said the police have seen a pattern of attacks on writers and intellectuals. Those involved are often well-off, Internet-savvy young people, he said, and not the impoverished men who typically committed such crimes in the past. Mr. Islam said the attackers operate in small groups and have been active so far in eight to 10 of the country’s 64 districts.

“At this stage, their strategy is silent, targeted killing,” he said.

Though the killing of Mr. Roy happened more than a month ago in a crowded street full of witnesses, the police have so far made only one arrest — Shafiur Rahman Farabi, who called for him to be murdered in a Facebook post.

Mr. Islam said Mr. Farabi “disclosed some information,” and that the police have identified additional suspects, a group of men not directly connected with Mr. Farabi. He said he believed more than five people were involved, and that several of them probably attended North South University.

The authorities were luckier on Monday, when bystanders caught two men trying to flee the scene; a third man escaped. In an exchange with journalists, the two suspects seemed remorseless, according to Mohammad Jamil Khan, a reporter for The Dhaka Tribune.

“They were talking with me very happily, that they have done a good job by killing the blogger,” Mr. Khan told the BBC. “They don’t feel any guilt. They think they have done a very good job for their religion.”

A failure to communicate

Blood on the border