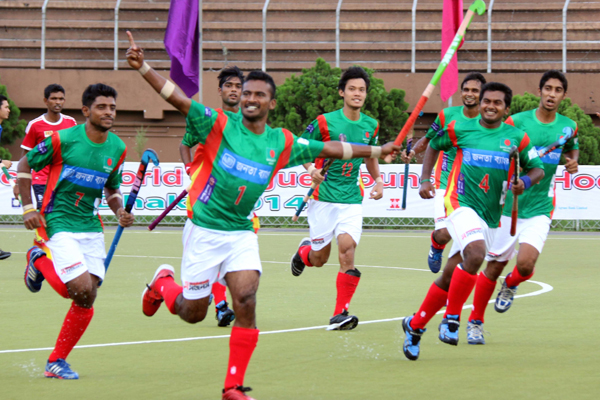 Bangladesh swept into the grand finale of the Asian Hockey Federation Cup after thrashing Singapore 8-0 in the last-four classification match at King’s Park Stadium in Hong Kong on Saturday. In the process, Bangladesh reached the final of this competition for the third consecutive time.

Bangladesh went ahead in the 26th minute through forward Milon Hossain’s field goal.

Captain Russel Mahmud Jimmy then made it 3-0 in the 37th minute.

The goals continued to flow as Pushkor Khisa Mimo bagged his side’s fifth in the 50th minute, Krishno Kumar the sixth in the 55th minute before two quickfire goals from another penalty-corner specialist Ashraful Islam in the 66th and 69th minute completed the rout.

Bangladesh will face the winner of the clash between Sri Lanka and hosts Hong Kong on Sunday.

Earlier in the group stages, the men in red and green defeated hosts Hong Kong 4-2, beat Chinese Taipei by the same scoreline before thumping Macau 13-0.

Bangladesh are the reigning AHF Cup champions having won the last two editions in 2012 and 2008 in Thailand and Singapore respectively.

Professor Yunus to be torchbearer at Olympic Games opening