Bangladesh And The Formula For Dissent 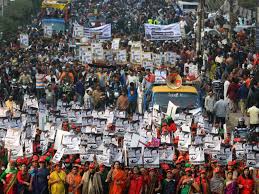 The events of January 23, 2019, in Venezuela are a startling reminder of the political situation in Bangladesh. The parallels are numerous economically, politically and socially. They simply present themselves differently on a global stage evoking contrasting reactions and outcomes. But, the core problems and sentiments of the people of Venezuela and the people of Bangladesh are more similar than not.

Political analysts have attributed the paramount crisis in Venezuela to two principal factors: the mismanagement of the economy and corruption. The first point has ultimately led to hyperinflation causing a lack of purchasing power of basic essentials such as food and medicine.

So how does this relate in any way to Bangladesh, a country with a booming economy, a Next 11 country according to Goldman Sachs, the country which will reportedly surpass even China in garments production? The image of Bangladesh projected to the outside world and Prime Minister Sheikh Hasina’s primary rhetoric is development and progress.

The world sees a Bangladesh with skyscrapers, multiple bridges and highways, a metro rail system in the pipelines, industries, shopping malls, nuclear power plants and even a satellite. While this is all a reality, the international community, the donors and the investors see only the aspects Sheikh Hasina’s administration wants them to see. Just as foreign “election observers” were only shown the polling stations that the ruling party wanted to take them to, similarly, we are given an image of a Bangladesh which the ruling party wants to project to the international community. The reality of the situation presents a stark contrast to the lustrous facade of development.

To begin with, Bangladesh has already indebted itself to China in the amount of $24 billion and counting over a period of 20 to 30 years. The Awami League government at no point in time disclosed exactly how these colossal loans would be repaid. The first obvious thought that comes to mind is raising taxes on the scores of millionaires the country is said to be producing, all with a net worth of a minimum of $30 million. However, no such plans were ever announced. In fact, the reality is quite the contrary.

The Awami League cronies who have over a period of no more than 10 years amassed wealth of epic proportions, are for the most part, tax exempt. Thus, it leaves us to envision a scenario were the loans and debts are left for the future generations to pay off. Would the government automatically deduct an amount from paychecks? What of the high rate of unemployment? Will Bangladesh be obliged to lease parts of the country such as its ports tin attempts to repay the loans? Considering that $81 billion have been hacked from the Bangladesh Bank in 2016 and all other state and private banks are equally in the red, who is to pick up the tab for this development? Moreover, the Washington based Global Financial Integrity released a report stating that in the 11 years from 2005, $81.7 billion have been siphoned from Bangladesh in illicit money transfers and money laundering. All these occurrences have been under the Awami League government’s watch.

These are issues which have not been addressed and if Sheikh Hasina and her administration have a plan of reimbursement mapped out to reimburse China and other investor countries, it is unbeknown to the people of Bangladesh.

These figures are very disturbing and astounding given that these funds belonged to the hardworking people of Bangladesh, the same people who are so much more in need of hospitals, schools, universities, clean air, clean water, safe roads, etc. These are the same people who have suffered atrocious human rights abuses and lost loved ones due to the Awami League’s extra judicial killings. These are also the very same people who were entirely stripped of their citizen’s rights and dignity guaranteed to them by the constitution of Bangladesh because the Sheikh Hasina government denied them of their most basic rights on December 30, 2018, when they rigged the election and declared themselves the winner.

Another aspect of the development course Bangladesh is on is that it is uniquely based in urban areas. Dhaka, being the epicenter of all economic activities, will benefit from the highways bridges, metro rails etc. The rural areas and even semi-urban areas have been almost completely neglected. Furthermore, focusing almost entirely on Dhaka has industrialized it heavily but absolutely no concern has been placed on the environment rendering Dhaka the second least livable city in the world after Damascus in war-torn Syria.

This past week, the international think tank Transparency International Bangladesh released a report which lists Bangladesh as the 13th most corrupt country in the world in 2018, dropping several notches from 17th in 2017. The numbers speak for themselves in light of tremendous amounts of money disappearing or being transferred out of the country.

These factors beg the question to Sheikh Hasina: what is “development”? Bangladesh is faced with rampant corruption, poor air and water quality, high inflation, a complete lack of freedom of speech and expression and no opposition? When law enforcement, the judiciary, the Election Commission, the military, the Anti-Corruption Commission, and every other entity has been politicized in favor of the ruling party, when the Prime Minister and her party declare an authoritarian government with a free pass to extra-judicial killings, disappearances, false lawsuits, corruption etc. without the people’s mandate, where is the “development”?

If Venezuela spiraled out of control because of the mismanagement of the economy and corruption, will Bangladesh be that much different in the not so distant future?

*The writer is a US-based political analyst and columnist focusing on the US and Bangladesh. She is a former elected member of Democrats Abroad. Remembrance for Latifur Rahman: ‘His principles will live on’ BSF shootings are not stopping