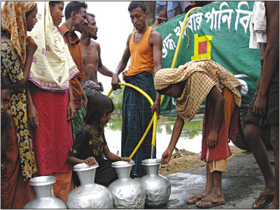 Five years after cyclone Aila devastated the south-western coast, safe drinking water for the victims  remains a far cry, a meeting was told here on Sunday.

Speakers at the meeting attributed the crisis to lack of initiatives from the government.

The speakers urged the government to take immediate actions to ensure safe water and sanitation, especially for the poor people of the coast.

The consultation meeting was jointly organized by NGO Forum for Public Health and Bangladesh Centre for Advanced Studies (BCAS) at the DPHE Conference Room of Kakrail with executive director of BCAS Dr. A. Atiq Rahman in the chair.

The meeting was told that 40 lakh people of 64 upazilas under 11 coastal districts of south-western coast are yet to recover from the devastation.

Salinity is a major problem, they said.

The intensity of heat is increasing every year.

In 2008 vegetation was 31% in Koyra area which came down to 9% in 2011. The problem is increasing as the government largely ignores it, according to a press release.

A Presentation was made on WaSH Situation of Aila-affected areas by Prof Dr. Adbullah Harun Chowdhury of Environmental Science Department of Khulna University.

Executive Director of NGO Forum S.M.A. Rashid called for bigger allocations in the National Budget for safe water in the region.