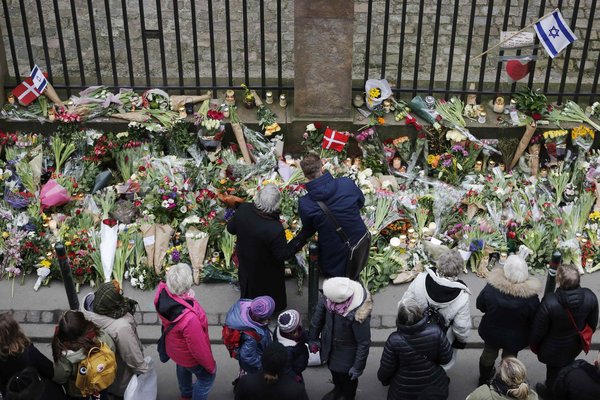 Two men suspected of helping the 22-year-old gunman responsible for killing a documentary filmmaker and a guard in Copenhagen in a rare instance of terrorism have been arrested, the Danish police said on Monday.

The two men, who were not identified, were detained on Sunday in raids in Norrebro, the neighborhood where the gunman was killed by officers as he opened fire. A judge ruled later Monday that they were to remain in custody for 10 days, pending the outcome of an investigation on suspicion of assisting the gunman.

The two men were believed to have helped shelter the gunmen and to have disposed of a weapon, the Danish authorities said.

The authorities had previously said the gunman appeared to have operated on his own, and Denmark’s prime minister said Monday that there was no evidence of a wider plot.

“We have no indication at this stage that he was part of a cell,” Prime Minister Helle Thorning-Schmidt said. “But we will of course in the coming time evaluate our fight against radicalization. We are already doing a lot.”

Heavily armed officers spread out on Sunday through Norrebro, where the gunman was believed to have lived, searching apartments and raiding an Internet cafe.

Joergen Skov, a spokesman for the police said Monday the gunman had visited the cafe between the attacks on Saturday, adding that the police were looking for information from anyone who had seen him at the time.

Danes responded to the attack with a mixture of regret and resolve. Mourners paid tribute to the victims by depositing flowers and candles at the sites of the killings, and Ms. Thorning-Schmidt vowed to “defend our democracy and Denmark.”

But the attacks, which came only weeks after a three-day onslaught in the Paris area that left 17 dead, and police raids in Belgium a week later, heightened concerns about terrorism in Europe.

The gunman, identified in Danish news reports as Omar Abdel Hamid El-Hussein, appears to have shared some traits with at least two of the militants responsible for the Paris violence — notably a criminal record and an abrupt transition from street crime to Islamic militancy.

The Copenhagen police have not publicly identified the gunman, saying only that he was 22 years old, was born and raised in Denmark, and was known to law enforcement officers because of gang-related activity and several criminal offenses linked to weapons violations and violence.

Copenhagen’s dense network of video surveillance cameras captured the gunman as he moved from one place to the next, and the police released several images of him on Monday. They appealed for any witnesses to come forward with information.

“We are especially interested in witnesses who observed the alleged offender regarding his whereabouts at the first crime scene,” the police said in a statement.

There was a large gap in time between the first killing, when the gunman opened fire Saturday afternoon at a cafe that was hosting a discussion on caricatures and freedom of speech, and the slaying shortly after midnight of a Jewish man guarding the entrance to the city’s main synagogue.

Copenhagen’s Jewish community has long been integrated into society, but religious leaders said that in the wake of recent attacks they had asked Danish authorities to reassess the threat level against them. On Saturday, as word spread of the attack on the cafe that killed the film director Finn Norgaard, 55, and wounded three officers, Jewish leaders requested police protection for the synagogue.

Other countries in Europe responded to the Copenhagen attacks with increased vigilance. In Germany, the authorities called off a carnival parade in the central German city of Braunschweig on Sunday, citing evidence of what they called a “specific threat of an Islamic attack.” The Swedish authorities said on Monday that they were considering raising their country’s terror alert.

Prime Minister Manuel Valls of France said the threat of militant attacks remained “particularly high” after the shootings in Copenhagen. He told RTL radio on Monday that exceptional security measures, which involve about 10,000 military personnel protecting public sites, would be kept in place as long as needed.

Mr. Valls also vowed to protect French Jews, after more than 200 tombs were damaged at a Jewish cemetery near Strasbourg on Sunday.

Benjamin Netanyahu, the Israeli prime minister, cited the attack at the Copenhagen synagogue as further grounds for European Jews to emigrate to Israel.

Ms. Thorning-Schmidt rejected the Israeli leader’s call, insisting that the country’s Jewish community was an essential part of Danish society.

“They belong in Denmark,” Ms. Thorning-Schmidt said on Sunday, as she laid flowers at a memorial to the slain Jewish guard, Dan Uzan, 37. “They are a strong part of our community, and we will do everything we can to protect the Jewish community in our country.”

More than 10,000 people were expected to turn out for a memorial later Monday, in a response similar to the masses who took to the streets of Paris in the wake of the attacks there. Smaller vigils were to be held in other cities across the country.

Bill Gates needs 218 years to spend all his money!