Bangladesh is sitting on a $2.1 billion surplus in Balance of Payments (BOP) at the end of the first six months of the current fiscal. 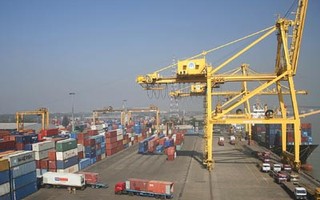 Bangladesh Bank expects the trend to continue for the rest of the financial year.

The surplus is 28 percent higher than the BOP surplus at this time last year.

The 2014-15 fiscal year had ended with a BOP deficit of $1.56 billion, but the situation changed rapidly at the beginning of the current fiscal.

“Food and oil imports have become cheaper because of the downward trend in global prices. Export incomes have surged ahead and remittance from expatriates is on the rise,” said Bangladesh Bank Governor Atiur Rahman.

“That is why the economic situation is so satisfying.”

Import cost in the same period is up 7 percent as well.

Economist Zaid Bakht told bdnews24.com it would be possible to maintain the trend of BOP surplus for the rest of the financial year.

“I am optimistic the BOP surplus will continue,” he said.

The BIDS researcher said, “If Bangladesh succeeds in maintaining her present upward trend in agricultural production, food import costs will be manageable. Since global oil prices are likely to remain low, oil imports costs will also remain under control.”

Remittance flow has almost remained at same levels as at this time last fiscal year.

The expatriates remitted over $7.4824 billion in this period this fiscal year, almost like last year.

The total trade deficit in last fiscal year was around $10 billion.

Bangladesh spent $19 billion for import while it earned $15.73 billion from export in July-December period this fiscal year.