Kazi Zafar joined the alliance by presenting Khaleda a flower bouquet around 7:45pm 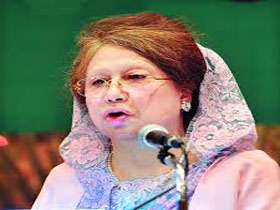 Addressing reporters at her Gulshan office yesterday evening, BNP Chairperson Khaleda Zia said that that the 18-party alliance would now include the Kazi Zafar Ahmed-led faction of the Jatiya Party, turning it into the 19-party alliance.

Kazi Zafar said: “We have to be united during the present crisis moment. We will remain beside BNP chief Khaleda Zia.” He also said they had to save the party from Ershad’s oscillation and bluff.

Ershad had expelled his Presidium Member Kazi Zafar on November 28 for differing with his opinion regarding the JaPa’s involvement in the January 5 poll. However, Kazi Zafar expelled Ershad from the party in a later statement and announced a special council that made him chairman and appointed Golam Mosih secretary general.

After holding a meeting with Khaleda on January 18, Kazi Zafar said his faction would be lending support to the 18-party alliance’s programmes on January 20 and 29.

Earlier in the afternoon, Kazi Zafar made the announcement to join the 18-party alliance at a press briefing held at his Gulshan residence. The decision was made at an extended meeting of the central committee of his party, which he claims to be the “real Jatiya Party.”

Kazi Zafar’s United Peoples’ Party (UPP) was a part of the BNP-led seven-party alliance when protests had been mounted against Ershad in the early 1980s. However, he later dissolved his party to join Ershad’s cabinet under a martial law regime.

AL has history of ties with Jamaat