A senior US official has said they assisted the Bangladesh government in its inquiry that exposed the conspiracy to abduct and assassinate Prime Minister Sheikh Hasina’s son in the US, according to PTI.

India’s official news agency quoted the unnamed official on Wednesday as saying that the Department of Justice responded to Dhaka’s request “for legal assistance related to this case”.

There have been reports that the Justice Department and the FBI had provided evidence of links of Amar Desh acting editor Mahmudur Rahman with the plot to kill Sajeeb Ahmed Wazed Joy. The response came when the official was asked to comment on the reports.

But the senior official would not talk about the nature of assistance provided to Dhaka, the Press Trust of India added.

“As a general matter, when the US government shares law enforcement information as part of a request for legal assistance, we do not comment on it,” the PTI quoted the official as saying.

The official advised the news agency to approach the Bangladeshi authorities with questions about the investigation.

The development follows police’s claim a day before that they had found evidence that established detained pro-BNP journalist Shafik Rehman’s involvement to the plot to abduct and murder Hasina’s 44-year old son.

The matter surfaced after a BNP leader’s son was jailed in the US last year for bribing a former FBI agent Robert Lustyik, through middleman Johannes Thaler, to access confidential security files on ‘a prominent Bangladeshi’.

Documents submitted to the court of the Southern District of New York also say that Ceaser had given the information to a ‘journalist in Bangladesh’ and ‘obtained in return approximately $30,000.’

Confidential documents from the FBI related to the plot were also found in a raid on Rehman’s house, police said.

An adviser to former prime minister and BNP chief Khaleda Zia, Rehman was remanded for five days after his arrest on Saturday.

The next day police said Mahmudur Rahman of Amar Desh will also be charged, claiming there was evidence that a friend of Caesar handed him secret information on Joy. 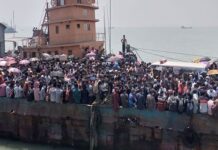