Just six years ago on this day, the then president Iajuddin Ahmed had to declare a state of emergency to stop the country from plunging into further political chaos with a general election round the corner.

le=”text-align: justify;”>And after six years, when another general election is approaching, the country is again heading for a political crisis, showing that the top politicians have failed to learn from the crisis in 2007.

“The situation has not yet deteriorated to the same extent that made the president to declare a state of emergency in January 2007. But recurrence of the unexpected event is not impossible as there are some signs similar to that of 2007,” observed Hafizuddin Ahmed, a former adviser to a caretaker government.

Urging both Awami League and BNP to start talks to resolve the growing crisis, he said politicians have created the problems and they have to solve it.

Lt Gen (retd) Mahbubur Rahman, a member of BNP standing committee, said politicians did not learn lessons from the 2007 event about how to avert recurrence of such political crisis.

“We are now at a critical juncture. The entire nation is worried about the future,” Mahbub, also former chief of the army, told The Daily Star.

However, ruling party Presidium Member Obaidul Quader ruled out the possibility of recurrence of such an event.

“I don’t think that same kind of incident will happen again. At least, the country is not in such a situation right now,” said Quader, also the communications minister.

The whole nation plunged into an abyss of instability, concern and uncertainty as there was no possibility of a peaceful transition of power through ballots. Both the rival camps –BNP and the AL-led electoral alliances — had taken extreme stance, shutting the door on resolving the crisis.

Under the leadership of Khaleda Zia, BNP-led four-party electoral alliance had been mounting pressure on the then caretaker government to anyhow hold the ninth parliamentary polls scheduled for January 22, 2007.

On the other hand, the AL-led alliance under the leadership of Sheikh Hasina had been putting pressure on the makeshift cabinet through vigorous agitations to cancel the scheduled elections. The alliance had earlier withdrawn from the electoral race.

The country at that time witnessed chaos and street violence that claimed many lives.

Donor agencies and diplomats kept their pressure on the then caretaker government and the political parties to resolve the ongoing crisis. They also warned that the elections would not be acceptable without the participation of all political parties.

Amid such a situation, the armed forces appeared in the scene and made the then president Iajuddin Ahmed, also chief adviser to the then caretaker government, to resign as the chief adviser and declare the state of emergency.

The declaration of the state of emergency had paved the way for cancellation of the parliamentary polls scheduled for January 22 the same year.

According to the current constitutional provision, the country will go to parliamentary elections anytime between October 27 this year and January 24, 2014.

Unfortunately, when the largest battle of ballots is near, politics once again is moving towards the path of confrontation. The cancellation of the caretaker government system by the AL-led government triggered fear that it will give rise to political unrest ahead of the next polls.

The opposition parties will make efforts to strengthen the anti-government agitations in the coming days to have the demand met, while the government and ruling party policymakers keep rejecting the opposition’s demand.

Given the situation, the possibility of any consensus between the ruling party and the opposition still remains a distant cry as both sides remain rigid on their stances. 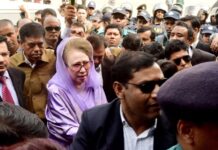 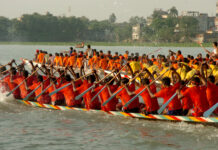