Prime Minister Sheikh Hasina on Monday lamented the stance of Dr Kamal Hossain over the uncontested election of some MPs in the last election though he himself was  elected unopposed in 1970 and 1973.

Without mentioning anybody’s name, Sheikh Hasina said one leader who was in Awami League is now very much vocal against the uncontested election.

“That leader was also elected in by-elections in 1970 and 1973. Those seats fell vacant as Bangabandhu had vacated those at that time,” she said.

Hasina said this in her introductory speech at a joint meeting of Awami League Central Working Committee, Advisory Council and AL Parliamentary Party at her official residence Ganobhaban.

“He himself was elected uncontested, but now he is very much vocal against the unopposed election of MPs in the last election,” she said.

Law Minister Anisul Huq then stood up and said that leader contested the by-elections in that seats which were vacated by Bangabandhu.

Prime Minister Sheikh Hasina questioned the leader who had become MP uncontested how could he now raise his voice against the same issue?

Talking about the last election where more than 150 MPs were elected uncontested, she said that it was not the fault of her party.

“Jamaat couldn’t contest he election, BNP didn’t come as Jamaat was unable to contest. What can we do then? There was no candidate except Awami League,” Hasina said.

She also mentioned that it was a politically wrong decision of BNP to boycott the election.

The Prime Minister said BNP and Jamaat had tried their best to foil the January-5 election, but failed. 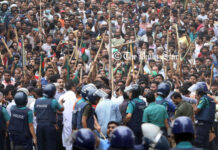 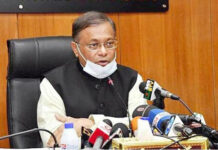 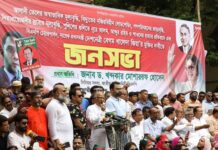