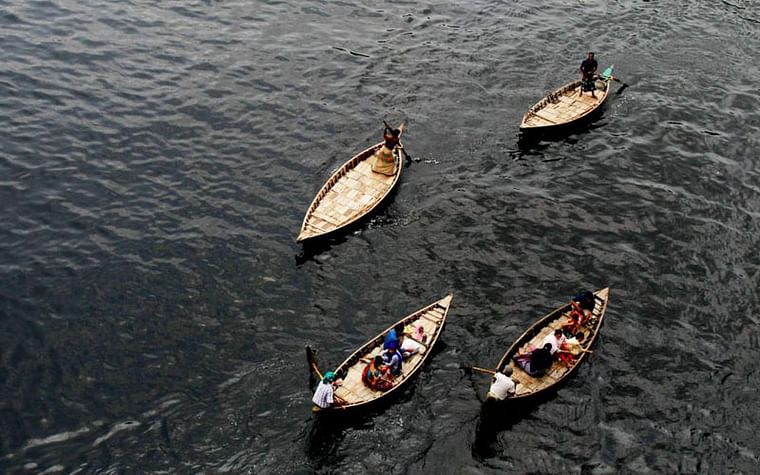 What is happening to the river Buriganga is very shocking. Days, months, years and decades have passed but the court verdict to take steps to prevent the river from pollution has not been effective yet. The court has summoned those responsible, reprimanded them and expressed dissatisfaction, but to no avail. Besides human waste, industrial waste, hospital waste, brick kilns and polythene have left Buriganga overly contaminated. This must be stopped at any cost.

We wonder why implementing the verdict had not been possible despite everyone wishing so? The government certainly did not interfere, nor did the common people object. So where does the obstacle lie? Is it someone’s failure to carry out the duties or some quarters have vested interest — the court should know.

Once upon a time, launches and steamers used to ply smoothly on the Buriganga while aquatic animals lived there comfortably. In the afternoon and in the evening, people used to gather on the banks of the river. Buriganga also provided the people of Dhaka with hilsa. Such a river is now dying in front of our eyes due to oppression, lawlessness and pollution. Now one has to cover the nose most of the time on the banks of the Buriganga. The pollution only decrease a bit when it rains.

According to a BIWTA report, there are 68 sewerage connections in the Buriganga, of which 56 are WASA’s. However, WASA has informed the court that there was no sewerage connection in Buriganga. Earlier, the court was further dissatisfied with this false report and served a show cause on the managing director of WASA.

A writ petition was filed in 2010 on behalf of Human Rights and Peace for Bangladesh (HRPB) seeking directives to take effective measures to prevent water pollution in the Buriganga. The verdict was given on June 1, 2011 with three-point instructions. It called for immediate action to stop the dumping of waste in the Buriganga and to shut down all sewer lines (sewerage) and industrial waste discharge lines connected to the river within six months.

As the directive was not fully implemented, the organisation lodged a supplementary appeal on April 30 last year. Following this, WASA MD Taksim A Khan appeared in the court on March 4 and promised to implement the verdict. WASA submitted two reports on 18 August and 7 September, but the court could not be satisfied.

The WASA MD has been there for 11 years, and the verdict came 10 years ago. How many more days will we have to wait for the implementation of this verdict? In addition to WASA, there are many authorities involved with the Buriganga river who cannot avoid responsibility. These governemnt entities can also be involved in the implementation of the court orders. MPs and heads of river protection commission, environment department, district administration, district and local police, Keraniganj upazila council and other organisations can play a role in this regard.

How democracies die and economies grow