Mustafizur Rahman shone with the ball as Rangpur Rangers beat Sylhet Thunder by seven wickets in the battle of lightweights in the Bangladesh Premier League to keep their slim hopes of qualifying into the knockout stage in Mirpur on Monday.

Mustafiz finished with 3-10, his back-to-back three-wicket haul that helped Rangpur restrict Sylhet to 133-9 in their stipulated overs before Cameron Delport struck a blistering 63 off 28 balls to guide the team to 134-3 in 17.2 overs.

This was the seventh defeat in eight games for Sylhet, which effectively ended their next round qualification chances while the second win in seven matches now created an outside chance for Rangpur.

‘We desperately needed a win… I think if we can show the same performance as we did today, we will be able to win the next matches,’ left-arm spinner Arafat Sunny told reporters after the match.

Sylhet’s number-three Mohammad Mithun hit 62 off 47 balls, his second fifty in the ongoing tournament but lack of support from the other side meant they had to remain content with a below-par total.

Asked to bat first, Sylhet lost their in-form batsmen Andre Fletcher (0) and Johnson Charles (nine) early in the innings before Mithun and skipper Mosaddek Hossain forged a 57-run stand for the third wicket.

Mosaddek, who made 15, was dismissed by a direct throw of Mohammad Naim and received a neck injury in the process as he attempted a dive at the non-strikers’ end.

Mosaddek didn’t return to the field again in the match and a spokesman of Sylhet confirmed that he would be under observation for a day.

After Mosaddek’s departure, Mithun added that 34 runs for the fourth wicket with Sherfane Rutherford to take their score over 100-run mark before Rangpur bowlers fought back with three quick wicket to reduce them to 111-6 in the 17th over.

Mustafiz removed Shohag Gazi (12) and Nayeem Hasan (eight) in consecutive deliveries to raise the prospect of a hat-trick in the final over but Monir Hossain’s run-out in the following delivery dashed his hope.

In reply, Rangpur lost skipper Shane Watson (one) in the second over after pacer Ebadot Hossain bowled him with a superb yorker.

Delport and opener Naim then shared a 99-run stand for the second wicket and in the meantime, Delport completed his first fifty this season. The South African was finally dismissed by Naveen-ul-Haq (2-13) after hitting six fours and five sixes.

However, Naim, who was dropped on one by Flecher off Nayeem, remained unbeaten on 38 off 50 balls while Nabi made unbeaten 18 off 12 to complete the victory.

‘We could not assess the condition very well. I think I should have given me a bit of time as I should not be going in the second ball,’ Fletcher said after the match.

‘The other batters did not bat well. Mithun played very well. But he needed support from at least one or two batsmen that could have given us a total above 170, which we could defend,’ he added. 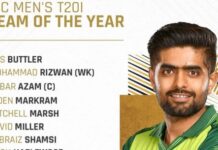 India Tour of Bangladesh 2015: Sourav Ganguly likely to be Appointed as Team India’s...

Khulna back on top of BPL 4